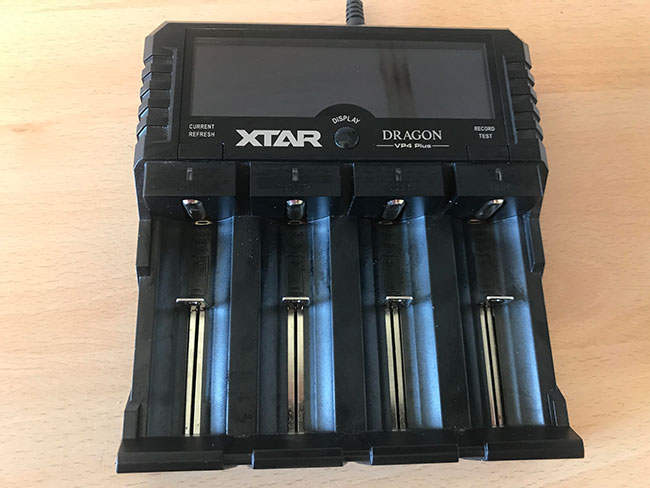 XTAR are one of the largest names within the battery industry, founded in 2006 and based out of China, XTAR manufacture and supply Li-on batteries, smart battery chargers and LED flashlights around the world. Thanks to their high standards of quality control, XTAR have achieved all major global certifications, such as CE and RoHS. They pride themselves on offering safe, high quality products.

I’ll be looking at the Dragon VP4 Plus from XTAR in the review below, this is a four bay battery charging monster that on paper, is the most feature rich charger I have ever seen!

XTAR’s Dragon VP4 Plus boasts four battery bays for charging up to four batteries, and is compatible with the most popular battery sizes for vaping use, as well as offering compatibility with Ni-MH batteries and battery packs. It has three current options, 0.5A, 1A and 2A, automatically cuts off charging at 4.2V, and uses ‘Current Buffering’ which offers a gradual increase in charging current to reduce strain on your batteries and prolong their lifespan. It can even function as a powerbank, and charge mobile phones as well as other devices through the USB ports included on the Dragon VP4 Plus. A large pouch is included, should you wish to carry the Dragon VP4 Plus around with you. 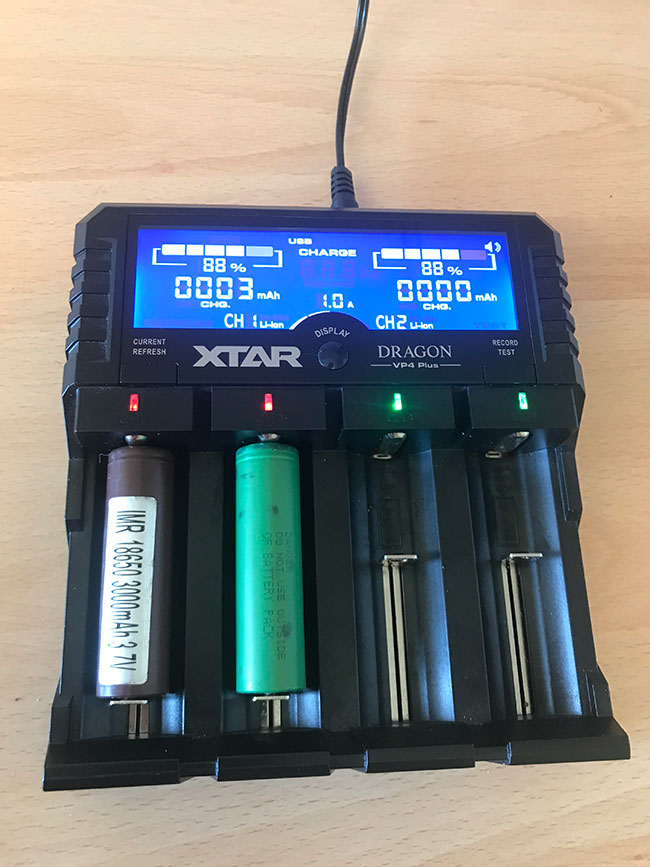 At the top of the charger, you’ll notice the large LCD screen which displays information such as the current charging status of your batteries, battery capacity, charging current and battery type. Underneath the screen is the ‘Display’, ‘Current Refresh’ and the ‘Record Test’ buttons, as well as four LED lights above each charging bay that indicate the current status of each bay. Red will display whilst a battery is charging, green will display when the battery has finished charging or the bay is empty and blue is displayed during discharging, test mode and powerbank mode. An optional sound setting is present, which can give you an audible sound for alerts. 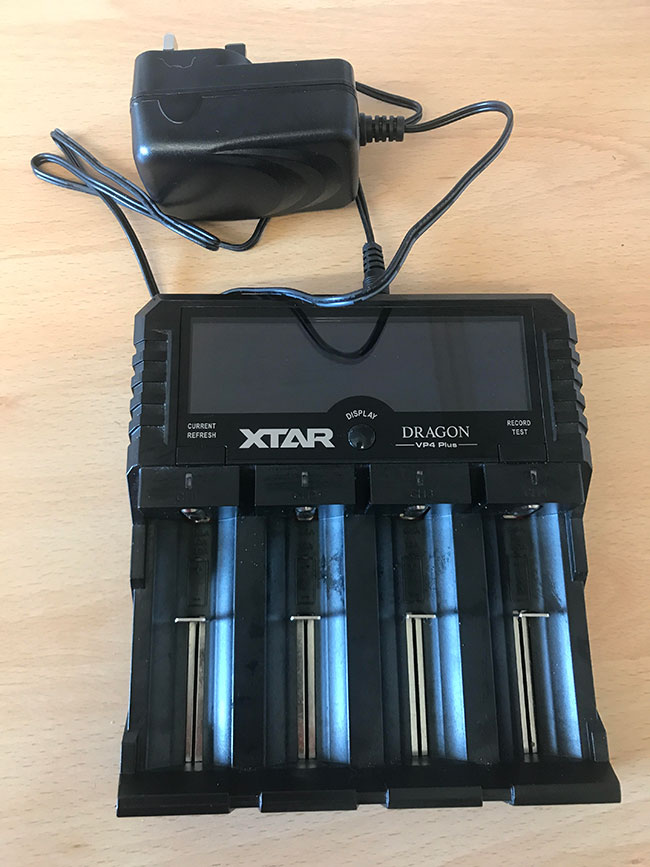 A multimeter function is included allowing you to measure the voltage and internal resistance of your battery. Multimeter probes are included, and you simply slot the USB connector into the port on the back of the Dragon VP4 Plus, place a probe at either end of your battery and the voltage and internal resistance will be displayed. If you also want to check the true mAh capacity of your battery, you can accurately test it through the charger, and you can also revive an over discharged battery as well.

The XTAR Dragon VP4 Plus has to be the most complete battery charger I have ever used, it’s a real beast of a charger. There’s pretty much every function you could want with a charger present here, and it does everything you could possibly want it to. The power bank option is really impressive, and the data you can collect on your batteries is not only interesting, but practical too- this allows you to see how your batteries are performing over time and see when it is best to invest in some new ones. Best of all, with the inbuilt safety features of the Dragon VP4 Plus it does everything safely, giving you peace of mind. One thing that really impressed me was just how quickly my batteries charged up!

It does come at a cost however, and with the retail price being in the £70-75 region this definitely isn’t a cheap battery charger, some users out there may not need to take advantage of all of the features that are on offer here. However for those looking for an advanced, feature rich battery charger, the XTAR Dragon VP4 Plus is a superb option to look at!  You can check it out on XTAR's site here http://www.xtar.cc/products_detail/productId=155.html.