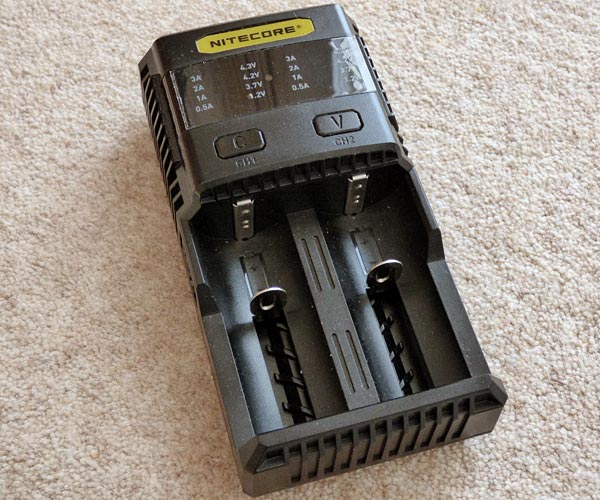 Nitecore, as I am sure many of you already know, are a manufacturer that produce efficient and reliable battery chargers. The SC2 Superb Charger is their latest product which offers optimized performance for quick charging and comes with plenty of safety features. 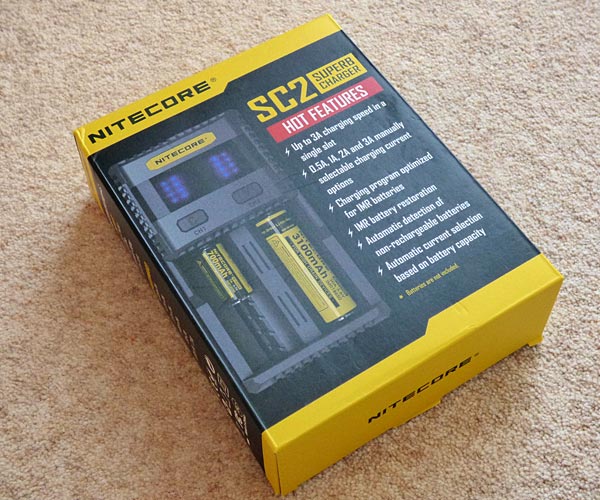 The SC2 is a very well put together product which feels nice and durable. For absolute peace of mind the device is made from fully fire retardant material/flame resistant material and it features temperature monitoring and optimal heat dissipation. The charger does have some significant weight so wherever you put it you can rest assured that it will stay in place.

At the top of the charger are two displays that show the desired Voltage and the number of Amps. These light up blue when charging your batteries and in addition the current charging progress is shown as flashing bars that slowly rise until finally becoming a solid set of bars which stop flashing when charging is complete.

The power lead is well made and has a thick cable so it should last you a considerable amount of time. The port for the power lead is solid and makes for a good connection. In addition there is an option to use the SC2 in combination with a car charger adapter (not included).

The SC2 has two bays so you can only charge a maximum of two batteries at a time. The bays feature spring loaded trays that you pull back before fitting your batteries. The trays are far easier to move than the ones on my i4 which have always been rather stiff since the day I bought it and over time this had something of a tendency to start to strip the wrapping on some of my batteries but the same problem also exists with mods that have very tight battery compartments.

One thing I do prefer about my i4 is that once you have batteries fitted in the bays they don’t move but with the SC2 if you were to accidentally knock it the batteries can shift and move a little too freely but this doesn’t really present a problem as long as you place the charger somewhere safely out of the way. In fairness the reason the design is like this is probably to cater for the much larger 26650 batteries.

The SC2 has plenty of venting and is loaded with numerous safety features. 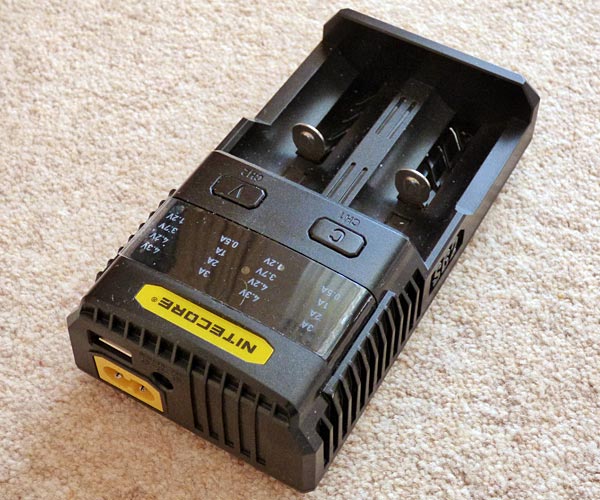 Using the SC2 is extremely straightforward and all you have to do is place your batteries in the trays and plug in the power lead. You can choose to either charge a matched pair or instead charge two individual 18650 batteries. Alternatively you could even charge a single 18650 and a 18350 or a 26650 battery at the same time.

The manual does detail additional features that might be of interest to some users including Manual Charging and IMR Battery Restoration.

For comparison I charged one pair of LG HE2 batteries in my Nitecore i4 Intellicharger and another pair in the SC2 Charger. Starting both pairs charging at exactly the same time I was really surprised at how quickly the SC2 charged and it took no more than one hour and forty minutes. In comparison the i4 took almost three hours.

It might not be the fairest comparison since my i4 is now a few years old but one thing is certain, the SC2 is very efficient and probably ideal for anyone who needs batteries charged in a hurry.

One minor issue worth mentioning is that for some odd reason the SC2 would not charge a pair of my Sony VTC5’s and would constantly show an error on the second bay display indicator yet both of them charge absolutely fine in my i4. I am at a loss to explain this since the charger recharged a single 18650 Sony VTC4 without issues. It is possible it is just those particular batteries since I do use them very often and perhaps the SC2 simply detects a problem with them that the i4 doesn’t pick up on.

At the end of the day despite a very minor quirk with one set of my batteries the SC2 works extremely well and in my opinion this is a very worthwhile and well put together device. 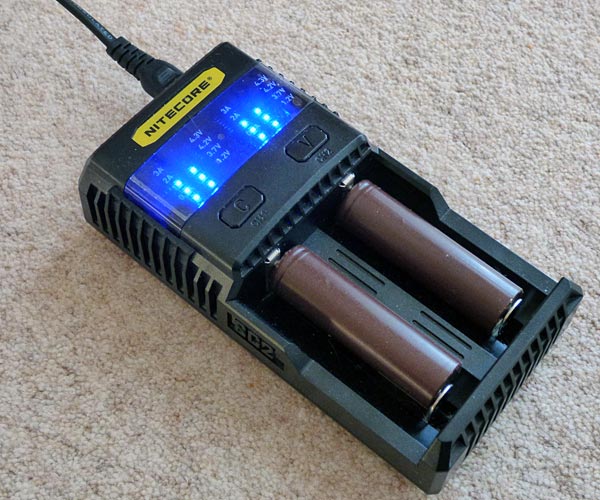 Like all Nitecore chargers the SC2 has the same high quality build you would expect from this manufacturer and is loaded with safety features for peace of mind. The SC2 works extremely well, charges fast and providing you only need to recharge one matched pair or single batteries it will be more than sufficient for modest or new vaping users.

Even though I personally need at least four bays due to the all of the reviewing I do, I will be sticking with my Nitecore i4 but I must admit it is tempting to pick one of these SC2 chargers up because it really does recharge batteries in half the time. Of course it could just serve as a major indication that my i4 is on its last legs.

Many thanks to Nitecore who kindly sent the SC2 Superb Charger to Planet of the Vapes for us to review.