Leaving No Smoker Behind

The Leaving No Smoker Behind event took place on Tuesday and was for anyone interested in finding solutions to smoking-related death and disease in adults presenting with substance use, mental illness and homelessness. It was chaired by Martin Dockrell, Tobacco Control Lead for Public Health England and featured presentations from Professor Lynne Dawkins, Dr Allison Ford, Dr Deborah Robson, and Louise Ross.

Martin Dockrell chaired said he had been getting exceptionally excited about the event due to his experience with combatting HIV and then tobacco harm reduction: “A lot of my work in HIV was with gay men, drug users, street prostitutes – the most disenfranchised of the public. The smoking burden similarly falls most heavily on the most disadvantaged and excluded.”

He delighted in the fact that modern approaches to tobacco harm reduction had moved away from the old top-down, paternalistic approaches. Martin also welcomed that all the speakers were women and, in turn, the fact that women have feminised the approach and changed the all-male culture that previously dominated.

Lynne introduced her research looking at 52 research studies on homeless communities accessing smoking cessation services. She mentioned how smoking rates are “exceptionally high” among the homeless and that most of the studies came from America – only one came from Europe and that was from the UK. 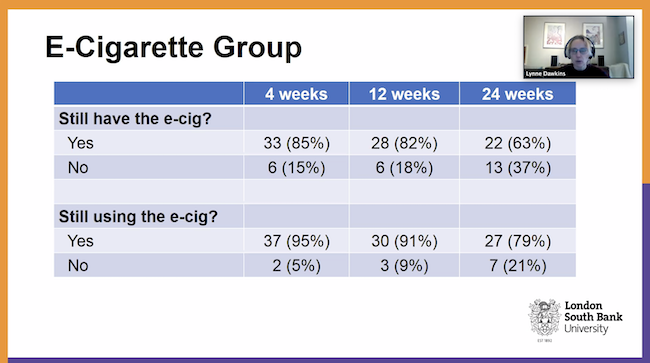 The interest in quitting smoking was “quite high” and similar to that found in the general population, “many had tried to quit in the past”. She found that vaping was the most popular route to quit but the price of a starter kit was prohibitive for the homeless. Results showed the most they could afford would be £5.

A secondary barrier was that smokers hang around with other smokers and that prevents successful quitting.

They allocated whole centres to either e-cigarette groups or usual care. This was done to prevent jealousy between clients receiving different care.

Centres were spread about the country and included one in Northampton, a country now making great strides in using vaping to combat the blight of tobacco addiction and disease.

For the NRT group, “we adapted a ‘10 Tips To Help You Stop Smoking’ factsheet and included lots of information about the local stop smoking service”. The vaping device was an Aspire Pocke-X kit with a tips and tricks sheet and their choice of juice.

The average number of cigarettes smoked per day by those taking part in the study was a pack of 20 per day.

Recruitment to the project was described as “good”, but retention drop-off was noticeable in the NRT group from 12 weeks. More people were using an e-cigarette than still had their original one. Lynne found this positive because although loses occurred due to breakages, participants were so motivated they replaced it with their own choice of a vaping device.

Was it a success?

Sustained abstinence from smoking was shown to be over three times better than NRT use in the general population – a resounding success for vaping.

Also, funders initially expressed fears that vaping would lead to drug use or the devices adapted to consume drugs. Lynne was proud to say that nothing like this was reported.

The article will be updated with a link to the presentations when the video is placed online.

Image by Quinn Kampschroer from Pixabay 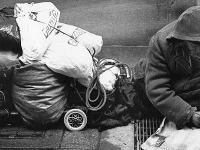