The SNP’s Stephen Flynn spoke to the House of Commons during a debate on the Finance Bill, in a Public Bill Committee. Calling for Scotland’s right to set independent tobacco tax rates, he spoke about the country’s approach to vaping and smoking cessation – but the advice Scotland gives to smokers appears to be lagging behind that of England.

“It is the desire of the Scottish Government and the SNP to have a tobacco-free generation in Scotland by 2034,” said Stephen Flynn. “Obviously, tobacco rates will play a role in that, but that is not necessarily stopping us entirely and we are still making positive efforts to get there.”

Speaking about the raft of different measures put in place by the Scottish Government, Flynn mentioned the 2020 ban on smoking near hospitals and hopes to further regulate “electronic cigarettes and MVP devices”.

Lumping vaping in with smoking, he celebrated, “a new national brand, Quit Your Way”. He told the committee: “It was launched in 2018 and is being promoted on behalf of the stop smoking service. A Scottish ministerial working group on tobacco control is helping develop policy to reduce the impact of tobacco on Scotland’s health and to manage the register of tobacco and nicotine vapour product retailers.” 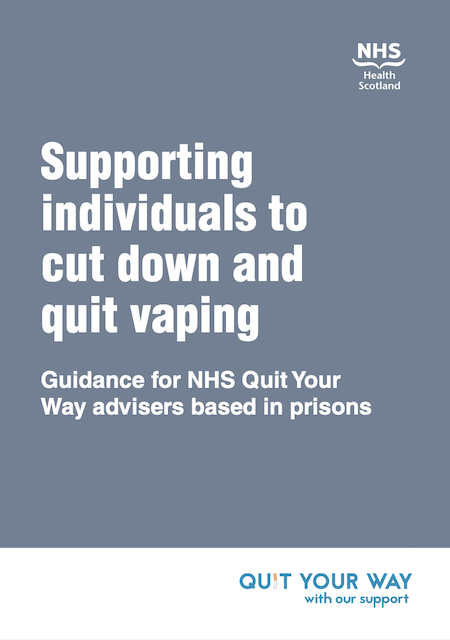 Quit You Way has been developed using the assistance of Professor Linda Bauld and, for someone so well versed in the research surrounding vaping, the advice is somewhat lacking.

Then the programme suggests this as the first port of call: “Nicotine is addictive, and willpower alone might not be enough. Give yourself a better chance of success by using stop smoking medication” – Champix, Zyban or tradition nicotine replacement products (NRT) like gum and patches.

The advice ignores the sterling evidence supplied by Professor Peter Hajek in a study demonstrating that the use of vapes was linked to the best level of success at quitting smoking. To leave out mention of ecigs altogether is somewhat shocking.

In complimentary material aimed at cessation practitioners operating within prison settings, the emphasis of the advice goes from bad to worse. It places stress on encouraging soon-to-be ex-prisoners to quit vaping.

“The guidance is based on a review of the existing evidence on cutting down or stopping vaping,” it says. The document then tells practitioners that when talking to clients they should, “explain what is in e-cigarette liquid.”

The advice is likely to be shoddy given the focus of this section of the programme and suggests that they (again) use varenicline and NRT to quit vaping.

Where have the authors obtained their wealth of information about the need and approaches to quitting vaping?

“A literature search, including grey and peer-reviewed published literature, was conducted by NHS Health Scotland Knowledge Services…Two papers were selected as relevant, supplemented with evidence from the Truth Initiative.”

As regular readers will know, the Truth Initiative publishes many statements and sponsors papers on vaping – most of them having a very tenuous link to the truth. NHS Scotland could and should do much better than this deplorable, limited, and blinkered approach.