The Vaping Trade Association of New Zealand (VTANZ) is warning the Health Select Committee that their Government’s vaping bill creates barriers for Kiwi smokers’ keen to quit tobacco and could see others return to cigarettes. The warning has been mirrored by The Aotearoa Vapers Community Advocacy in its submission to the Committee.

The submission commends legislation being introduction into Parliament after the industry called for regulation over the past five years. However, it makes clear that limiting the availability and desirability of vaping products for adults will only serve the interests of Big Tobacco companies, enabling them to maintain their stranglehold on at-risk Kiwis and communities.

The bill proposes limiting vape flavours to just menthol, mint and tobacco for all non-specialist vape retailers. Although VTANZ’s research shows only 10% of flavour sales in their own members’ stores are for those three. Instead, fruit, dessert and sweet flavour variations are the most popular for adults and key to smokers successfully quitting tobacco.

“To convert smokers, these flavours must be available where cigarettes are sold as smokers are the highest risk population.”

The submission notes that past statistics showed 48% of cigarettes sold in New Zealand were sold in dairies/convenience stores, 23% in supermarkets, and 19% in service stations.

Given the bill proposes to restrict such general retailers to three flavours, VTANZ argues New Zealanders currently buying cigarettes will have no access to the flavours that 80% to 90% of ex-smokers use to help them quit smoking and stay off cigarettes. What’s more, rural areas with no vape stores would be unfairly disadvantaged.

VTANZ has called for a fairer and more balanced approach to flavour restrictions.

“We submit that the use of standardised flavour indicators for general stores, combined with strict enforcement of laws governing underage selling, will allow for the essential availability of flavours to help smokers quit while limiting the appeal and access to youth.”

It notes that over recent decades there have been no access restrictions on the number of retailers that can sell tobacco, which has probably only gone up, yet youth smoking has declined from 14% in 2006/07 to only 3% in 2019. This is due to a combination of education and enforced age restrictions on stores selling those nicotine products, with harsh penalties in place.

While it supports government playing an educational role, through the likes of the HPA, to promote the advantages of switching from smoking to vaping, “we believe that this message could be much more readily and effectively communicated if vape companies themselves were entitled to promote these benefits using their profits as opposed to the Government solely using taxpayers money on campaigns.”

VTANZ believes a total advertising ban and only allowing in-store displays would again play into the hands of tobacco companies. Representatives of their international vape brands would just ramp up various underground retail tactics, such as exclusive contracts with convenience stores that guarantee them shelf space.

“Without access to advertising to distinguish themselves, independent New Zealand companies will be suffocated by tobacco company tactics and the industry will revert back to the monopolised Big Tobacco ecosystem we have in the cigarette industry today.”

On common misperceptions about vaping, the submission provided significant evidence to demonstrate that accessibility to flavours does not increase youth uptake, nor is there any evidence that vaping is a gateway to smoking. It also documented extensive research which has consistently proven that vaping is considerably less harmful than smoking.

The submission requested that the “excessive” new powers for the Director-General of Health be addressed, challenged vaping being restricted to smoking areas, and argued for vaping to be encouraged, not banned, in healthcare settings.

VTANZ also requested an extension of time, beyond the proposed six months, for vaping specialists and general retailers to comply with the new vaping laws. 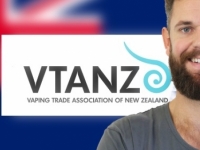