No one knew about Philip Morris International’s (PMI) donation of respirators to the Greek government until ‘independent’ journalists broke a story that sent tobacco controllers into a meltdown. The anger at PMI’s generosity spiralled when anti-vape zealots discovered British American Tobacco (BAT) is working on a vaccine for COVID-19.

It was some publicity stunt given that nobody knew about it. A subsidiary of PMI, Papastratos, donated 50 ventilators to the Greek healthcare system – “including 19 to intensive care units at the Sotiria General Hospital of Thoracic Diseases in Athens,” according to the shocked TBIJ reporter.

TBIJ quote ASH’s Deborah Arnott saying: “This is a shameful publicity stunt by Philip Morris International, which owns Papastratos and has a 40% share of the Greek tobacco market.”

Others then joined in the attack on PMI for doing this terrible thing. It must have been true because the TBIJ state they, “tell the stories that matter” and engage in “quality reporting” to “spark change”.

Then Dr Moira Gilchrist, PMI’s Vice President, responded. She described the article as the, “most shameful Vital Strategies funded article from TBIJ to-date”.

“There's a pandemic,” she pointed out, (because TBIJ and the tobacco controllers have obviously missed what is going on in the world). “We were ASKED to help source life-saving ventilators by the Greek Ministry of Health. Why? Because we could do it. And did. TBIJ knew this. We told them a week ago.”

She says TBIJ “decided to twist the story”, as it “seems they would rather [PMI] did nothing”.

The response appears to back up that point of view as tobacco control experts lined up after each other to say the ventilators should either not have been accepted or they should have been returned.

As far as it being a “shameful publicity stunt”, Dr Gilchrist points out that PMI issued no press release, did no corporate social media, made no mention of it on its website and gave no interviews about it.

“Our team worked hard to help their community - some commented on their own SM accounts. As is their right. If there's any ‘publicity stunt’ it is coming from TBIJ on behalf of themselves, ASH UK, and Vital Strategies. During this pandemic we'll continue helping communities. It’s the right thing to do.”

Dr Gilchrist echoes the feelings of many harm reduction advocates by calling out ASH UK for twisting and politicising the situation, and issued a challenge to TBIJ: “Why do they refuse to sign up to an independent press regulator? Such as IPSO or Impress. Be held to account yourselves, TBIJ. Go on, I dare you.”

Anti-vape crusader Wanda de Kanter demonstrated her logic was as good as her spelling as she demanded ventilator donation “has to stop”. Presumably, if de Kanter becomes ill, she’ll refuse the use of one? 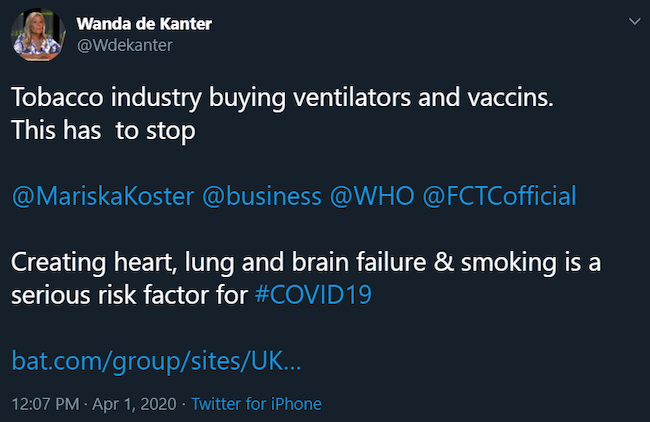 Likewise, de Kanter will doubtlessly refuse a vaccine should BAT’s current work prove successful. The tobacco firm announced: “US bio-tech subsidiary, Kentucky BioProcessing (KBP), is developing a potential vaccine for COVID-19 and is now in pre-clinical testing. If testing goes well, BAT is hopeful that, with the right partners and support from government agencies, between 1 and 3 million doses of the vaccine could be manufactured per week, beginning in June.”

“While KBP remains a commercial operation, the intention is that its work around the Covid-19 vaccine project will be carried out on a not for profit basis.”

The company points out:

Previously, in 2014, KBP made headlines as one of the few companies with an effective treatment for Ebola, having manufactured ZMapp™ with California-based company Mapp BioPharmaceuticals in partnership with the U.S. Biomedical Advanced Research and Development Authority (BARDA).

“KBP recently cloned a portion of COVID-19’s genetic sequence which led to the development of a potential antigen - a substance which induces an immune response in the body and in particular, the production of antibodies. This antigen was then inserted into tobacco plants for reproduction and, once the plants were harvested, the antigen was then purified, and is now undergoing pre-clinical testing.”

“BAT is now exploring partnerships with government agencies to bring its vaccine to clinical studies as soon as possible. Through collaborations with government and third-party manufacturers, BAT believes that between 1 and 3 million doses per week could be manufactured.”

Dr David O’Reilly, Director of Scientific Research, BAT said: “We are engaged with the US Food and Drug Administration and are seeking guidance on next steps. We have also engaged with the UK’s Department for Health and Social Care, and BARDA in the US, to offer our support and access to our research with the aim of trying to expedite the development of a vaccine for Covid-19.”

“Vaccine development is challenging and complex work, but we believe we have made a significant break-through with our tobacco plant technology platform and stand ready to work with Governments and all stakeholders to help win the war against Covid-19. We fully align with the United Nations plea, for a whole-of-society approach to combat global problems.”

“KBP has been exploring alternative uses of the tobacco plant for some time. One such alternative use is the development of plant-based vaccines. We are committed to contributing to the global effort to halt the spread of Covid-19 using this technology.”

It takes a huge and flawed leap of logic to argue that victims of COVID-19 should be denied ventilators or vaccines because of the companies who paid for them, but then those sick minds have been arguing against harm reduction for years. Their true colours – including those of de Kanter’s and TBIJ – are vile, lacking any self-awareness, and thoroughly reprehensible. 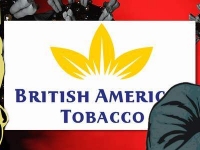