Professors Stanton Glantz and Dharma Bhatta, University of California San Francisco (UCSF), have “analysed” Population Assessment of Tobacco and Health (PATH) data to look for links between vaping and respiratory disease. It will surprise nobody to discover that they found an increased risk of “chronic lung diseases including asthma, bronchitis and emphysema”.

The UCSF pair also claim that their findings support Glantz’ previous allegations, “that people who used e-cigarettes and also smoked tobacco -- by far the most common pattern among adult e-cigarette users -- were at an even higher risk of developing chronic lung disease than those who used either product alone.”

“Association of E-Cigarette Use With Respiratory Disease Among Adults: A Longitudinal Analysis” has been published in the American Journal of Preventive Medicine on December 16th, but many are experiencing issues loading the webpage or accessing the full paper.

Having looked at the data from 32,000 American adults from 2013 to 2016, Glantz believes that correlation offers evidence of a causal link. He said: “What we found is that for e-cigarette users, the odds of developing lung disease increased by about a third, even after controlling for their tobacco use and their clinical and demographic information. We concluded that e-cigarettes are harmful on their own, and the effects are independent of smoking conventional tobacco.”

The study considered someone who had ever used an electronic cigarette, even just once or twice, a current user. Like his previous work, his findings run contrary to work that looks at real world impact – such as a study conducted by Ricardo Polosa in 2018 [link].

Polosa’s study found that vaping “may ameliorate objective and subjective COPD outcomes and that the benefits gained may persist long-term. EC use may reverse some of the harm resulting from tobacco smoking in COPD patients.”

Following Glantz presenting his preliminary findings to a conference earlier in the year, Clive Bates wrote: “Given the data cover three waves each about a year apart, the data is capturing the onset of disease with increasing age and continuing lung decline in lung function. The question for Professor Glantz is what exactly do you mean by ‘controlling for cigarette smoking’?  Separating the effect of vaping from prior or current smoking over this timescale would require, at least, very high-fidelity information on smoking behaviour and history and is probably impossible.” [link]

Bates cites Carl V Phillips: “This research approach is fatally flawed because of unrecorded details of someone’s smoking history. [Professor] Glantz has absurdly insisted that the study controlled for smoking by including variables for current and former smoking. But smoking is not a dichotomous (or trichotomous) exposure. Smokers who smoke more, or used to smoke more, have higher risk of disease. Former smokers who quit recently are at much higher risk than those who quit long ago. Former smokers who vape will have quit smoking relatively recently and are more likely to have been hardcore smokers (less intense smokers who could take-it-or-leave-it are more likely to just stop, not switch to vaping). Current smokers who vape are probably more intense smokers who are motivated to search for a useful aid to quitting or are more interested in a substitute for when they cannot smoke.” 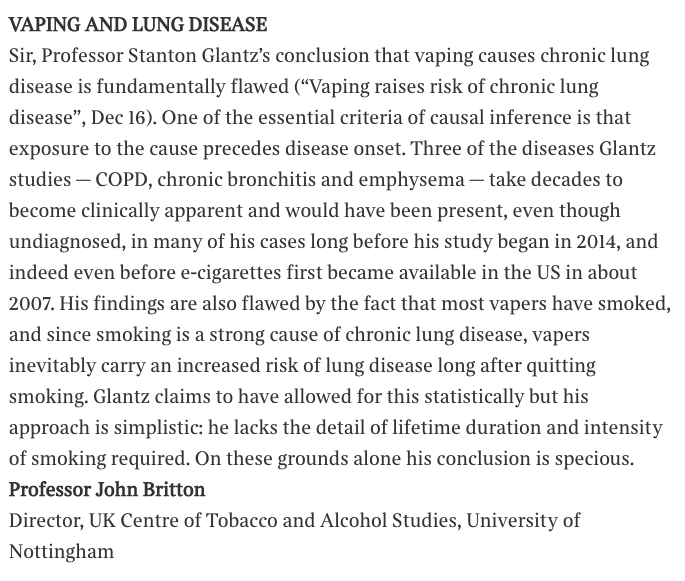 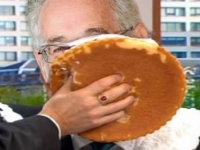 Another Pie in Glantz’ Face