Drugs And The Surgeon General

US Surgeon General Jerome Adams usually reserves his more bizarre nonsense for his personal social media account, but this week kicked it off on his official Twitter profile. Again, he appears to have regurgitated something he hasn’t read as he spreads a story about a child needing CPR after taking drugs – claiming he was “vaping at school”.

The story originated on Fox 5 News and focussed on London Davis, a teenager at South Paulding High School. Right near the top of the article, Fox 5 point out that Davis was using “a drug pen”.

The lad’s mother Emily Woodall said: “A kid met him in [the toilets] and offered him a hit off of a dab pen, and he took it and went back to class and within 20 minutes or so he was not able to breathe very well, his heart was pounding. His heart had stopped, at some point, for about two minutes.” 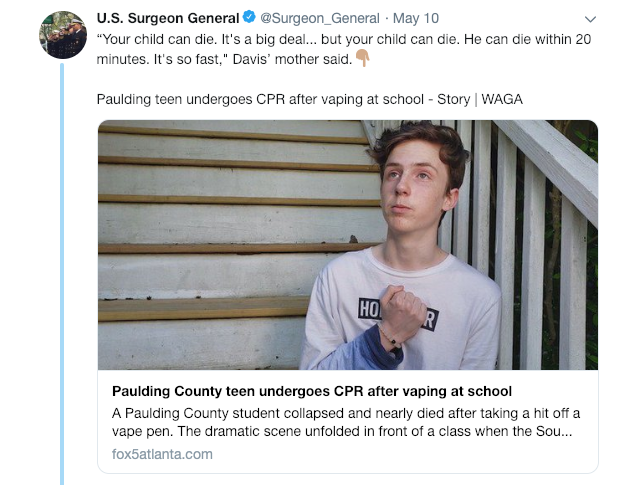 Davis is reported as saying: “My chest really felt like it was all scrunched up, and my eyes felt like they were coming out of my head, and my heartbeat was like crazy.”

It is believed that Davis’ heart stopped and the school nurse performed a CPR procedure (chest compressions with artificial ventilation). Also, people suspect that the dab pen didn’t just contain THC, the principal psychoactive constituent of cannabis, but this has not been proved true.

The school has issued a press release but it doesn’t shine any further light on the incident. This didn’t matter to Jerome Adams as he took to his keyboard.

Adams claims that he is constantly trying to engage with the vaping community and that he is “trying for balance”. Where is the balance in the following statement?

The article clearly stated that Davis was using “a drug pen”, but Adams spins it to be about vaping. This isn’t balance; this is either trolling, stupidity or ignorance.

CASAA, the Consumer Advocates for Smoke-free Alternatives, said the Surgeon General’s tweet “misleads public by implying a nicotine vapour device led to teen's need for CPR. In truth, it was a THC vape device that is suspected to have also contained other unknown drugs. How does public trust info coming from those using such disingenuous tactics?”

Given that Adams has placed a number of experts and advocates on mute or block (as part of his “engaged extensively” approach), it was just The Foundation For A Smoke-free World’s Charles Gardner who elicited a response.

Gardner: “Does it really make sense for the Surgeon General of the United States of America to share this unverified anecdote to promote US public health?”

Adams didn’t reply to the question, instead he posed his own: “Does it make sense to let more kids almost or actually die before warning parents, because you’re worried about possibly scaring adults?”

Gardner: “Not for me to tell the SG how to tweet. But basing your messaging on solid verifiable evidence rather than click-bait headlines might be a good thing.”

Adams then gave the clearest indication he is either bent on persuing a poltiical line or clearly has an inability to read simple English statements: “Doubling down huh? So who are you accusing of lying? The kid who said he hit a vape pen and passed out, or the responder who did CPR on him? Couldn’t we all agree kids shouldn’t be using these devices, vs downplaying a pediatric cardiac arrest in an attempt to defend ecig use?”

Gardner wasn’t doubling down, didn’t accuse him of lying, the kid didn’t say he used a “vape” pen, nobody argued with what happened, nobody promoted vaping for children.

It leaves the question: Is the Surgeon General stupid or inept? 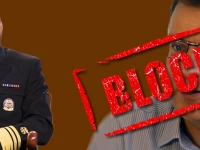 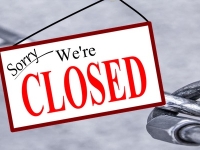