The Action on Smoking and Health (ASH) briefing provides information about vaping. It examines their benefits and risks, use and prevalence of electronic cigarettes in the UK. It covers the use of ecigs as a smoking cessation aid, and the composition of the UK vape market.

In case anybody is still unsure what an electronic cigarette is, ASH provide an overview of the construction. The organisation points out the nicotine strength limits imposed under the UK Tobacco and Related Products Regulations 2016, and note the other implications of the legislation. 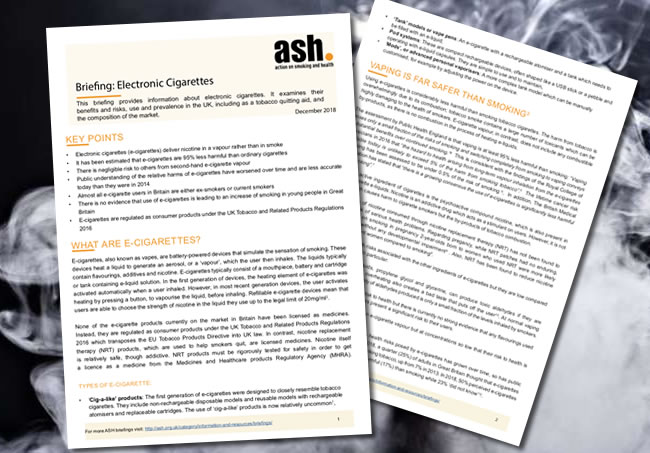 Vaping is far safer than smoking

The organisation cites Public Health England saying: “Vaping poses only a small fraction of the risks of smoking and switching completely from smoking to vaping conveys substantial benefits over continued smoking.”

ASH also refers to a statement from the Royal College of Physicians: “The hazard to health arising from long-term vapour inhalation from the e-cigarettes available today is unlikely to exceed 5% of the harm from smoking tobacco.”

Finally, in under this heading, ASH quotes The British Medical Association: “There is a growing consensus the use of e-cigarettes is significantly less harmful than smoking”.

Risk to others is low

“There is no evidence of harm to health from ‘second hand vaping’ and the risks are likely to be very low. The risk to users of inhaling e-cigarette vapour is low and the risk to those who breathe their exhaled vapour is even lower due to only exhaled aerosol being emitted.”

“The 2018 Public Health England review concluded that the low level of toxins found in e-cigarette aerosol were unlikely to have to lead to any health implications. Further, nicotine levels in second hand vapour were at non-detectable levels compared to secondhand smoke.”

The organisation goes on to add that the risk of poisoning from eliquid is of the same level posed by nicotine gum or patches. It adds: “Current regulations help to reduce these risks by specifying child resistant and tamper evident containers.”

Who vapes and why?

“The vast majority of e-cigarettes are used by ex-smokers and current smokers … to quit smoking or cut down the amount they smoke.”

“The use of e-cigarettes by smokers who want to quit smoking increases their chance of success.”

“There is no strong evidence that e-cigarettes are leading never smokers into cigarette smoking, in the UK. E-cigarettes have proved to be an important gateway out of smoking, not into it.”

“Data from five large surveys of 11-16 year olds in the UK conducted between 2015 and 2017 found that most young people who experiment with e-cigarettes did not become regular users.”