The journal Nicotine and Tobacco Research has published a paper by Professor Lynn Kozlowski, titled: “Younger individuals and their human right to harm reduction information should be considered in determining ethically appropriate public health actions”. He calls for a change in thinking when it comes to providing evidence and forming policy.

Lynn Kozlowski is a professor of Community Health and Health Behaviour at the University at Buffalo School of Public Health and Health Professions. The university states he “is an internationally recognized expert on tobacco use, e-cigarettes and nicotine policy. He can speak to the media about these issues, including trends in both smoking and vaping (including Juuling).” 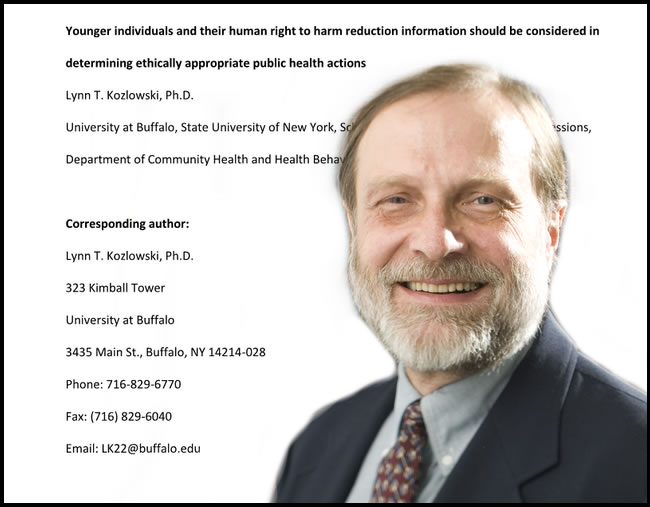 Kozlowski points out that, even for youth, major national and international agencies have widely accepted that there’s a human right to harm reduction information for sexual health. He highlights that the same can’t be said when it comes to nicotine and tobacco-harm reduction.

He argues that those involved in public health, “include genuine consideration of a human right to health-relevant information for both youth and adults.”

In quoting The Society of Adolescent Health and Medicine, Kozlowski says: “For preventing sexually- transmitted diseases (e.g., HIV-AIDS) and unwanted pregnancies, the importance of human rights to health-relevant information on safer sex practices for youth is well-established.”

He says this is all-too often ignored when it comes to tobacco and nicotine, especially for young people: “In the United States the favoured message for tobacco/nicotine products has been, ‘there is no safe tobacco,’ despite evidence that a) smokeless tobacco and vaping products are much less harmful to health than cigarettes and b) most Americans mistakenly think these products are at least as harmful as cigarettes.”

The billionaire Michael Bloomberg has ploughed millions of dollars into anti-vaping lobby organisations which have created websites full of lies and influenced the Food and Drug Administration to wage an ideological war on vaping – one where truth and evidence was an early casualty.

Kozlowski says that “The 2016 report of the Surgeon General on E-cigarette use among youth (aged 11-17) and young adults” wholly failed to address the “rights of young people to health-relevant information”.

While mentioning that vaping is safer than smoking, he argues that the focus of the report was to concentrate on potential (yet unproven) harm and fixate on restricting access.

It should be noted that Kozlowski has contributed to four U.S. Surgeon General’s Reports on smoking and health since 1981.

“The SGR took a strong paternalistic stance that goes beyond protections for underage individuals to not even consider that young adults (even 21-24 year olds) might have a right to information on material facts about products legally available to them.”

He says that it perverts a definition of the Precautionary Principle in order to pursue an agenda, and cites the original version laid down by the United Nations: “The PP is not based on ‘zero risks’ but aims to achieve lower or more acceptable risks or hazards”.

Kozlowski explains why he believes this is happening: “I think that many experts believe that informing the public of differential risks of tobacco/nicotine products ‘sends the wrong message’ and would promote use.”

He concludes: “Our ‘thinking’ about these issues needs to go beyond our ‘feelings.’ Human rights are not the only bioethical principle to be weighed, but the omission of thinking about a human right for health-relevant information should be considered inappropriate and should be discouraged.”