Last week an email circulated from The Daily Telegraph, seeking responses to the 12-point position statement taken by nine anti-vaping “experts” in advance of an article published on March 2nd. A second article was also sneaked into the paywalled section of the site, slamming Instagram for promoting vaping to 13-yr olds – wrapped up as a piece of investigative journalism. On Sunday, Camilla Turner wrote about vapers making “death threats” to these academics.

The collection of “experts” include: 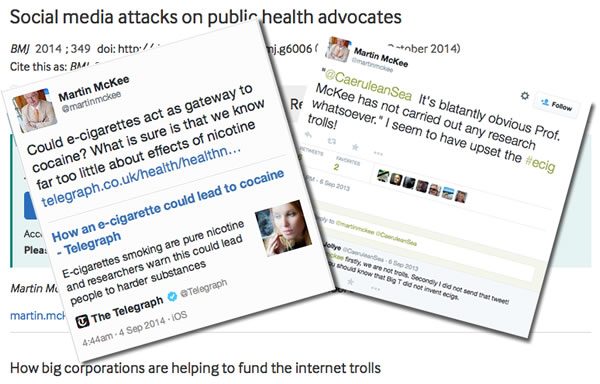 The hatchet job stated, “E-cigarettes are creating a generation of nicotine addicts”, and accused Public Health England of “walking around with blinders on”.

A leading pro-vaping harm reduction expert wrote: “Not even the headline makes sense! Creating - - not yet happened. Addicts - without proper use of the word. Top scientists - but deliberately misreading the evidence. Poor journalism.”

The “experts” attacked the 95% safer figure as being “not credible”, that it’s “transparent balloni”, and repeated drivel such as vaping being “as bad as cigarettes”.

Inevitably, people have recalled the abysmal article written by Sarah Knapton, one that prompted Lord Callanan to call her a “junk scientist”. The label aptly applies to many in the “expert” list. Blogger Dick Puddlecoat has written about them here. 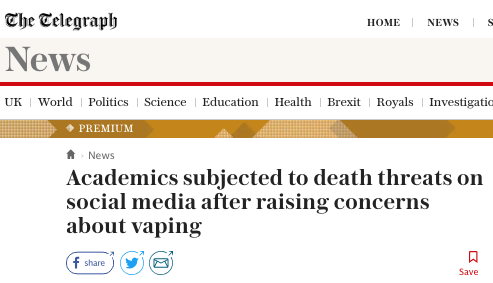 om Clive Bates’ blog, the “experts” have given their opinions on the following topics:

Clive Bates systematically dismantles each of these points in his article here.

Then, on Sunday, Camilla Turner wrote a piece titled, “Academics subjected to death threats on social media after raising concerns about vaping”, again hidden behind the paywall.

“Leading academics and public health experts have been subjected to ‘coordinated’ campaigns of abuse - including death threats - on social media, after raising concerns about vaping. Some professors said they were left feeling afraid to speak out on the matter after coming under sustained attacks online.”

“In some cases, prominent academics have been sent pictures of nooses with accompanying messages saying ‘your days are numbered’, while elsewhere their children have been threatened.”

Bates called the abuse article as an example of “more barrel-scraping”, before continuing: “The 'death threat' is one silly tweet from 2014. The real story: self-pitying public health profs think the public should know its place.” 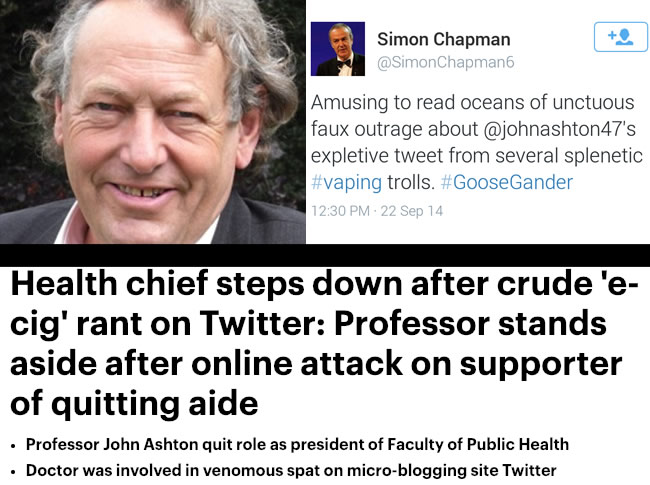 The Telegraph’s claims are ludicrous given that Stanton Glantz has been found guilty of sexual harrassment and workplace bullying by his university departmental conducts committee. Just last week we wrote how Glantz was subjected to #MeToo protests outside a recent SRNT event.

Glantz isn’t alone in this kind of behaviour. As harm reduction advocate Jukka Kelovuori wrote: “Maybe these so called ‘experts’ claiming to be ‘victims’ aren't really all that innocent themselves? In fact, could it be that these men are themselves the abusers, bullies and trolls?”

John Ashton was eased out of his post after he responded to simple questions by calling vapers anonymous trolls, and he abused one vaper by calling him a “c***”.

Martin McKee, Simon Chapman, Mike Daube and Stanton Glantz have a history of attacking vapers and harm reduction advocates. In 2014, they penned a letter to The Lancet attacking Lorien Jollye, a member of the Electronic Cigarette Consumers Association and of the New Nicotine Alliance. Clive Bates awarded their letter “The Worst Letter of 2014” at the time.

Lorien had written that vapers “have been insulted or ignored, often both, in a shockingly aggressive way. Why? The sense of frustration is palpable among us. No matter how polite or constructive we are, some of the most influential and media savvy in public health will instantly bemoan the so-called trolling they are having to endure, which closes doors to people we have never even spoken to.”

“Are we unreasonable and silly for expecting to have a say in what's happening with our lives? Decisions are being made about us, but definitely without us.”

Rather than engage, the foursome adopted a ridiculously defensive position and retorted: “The advocates of e-cigarettes seem only willing to engage on their own terms. Second, anyone with the temerity to suggest that e-cigarettes are anything other than the game changing solution to the problem of tobacco will be subject to grossly offensive attacks, with growing evidence that these are being orchestrated.” 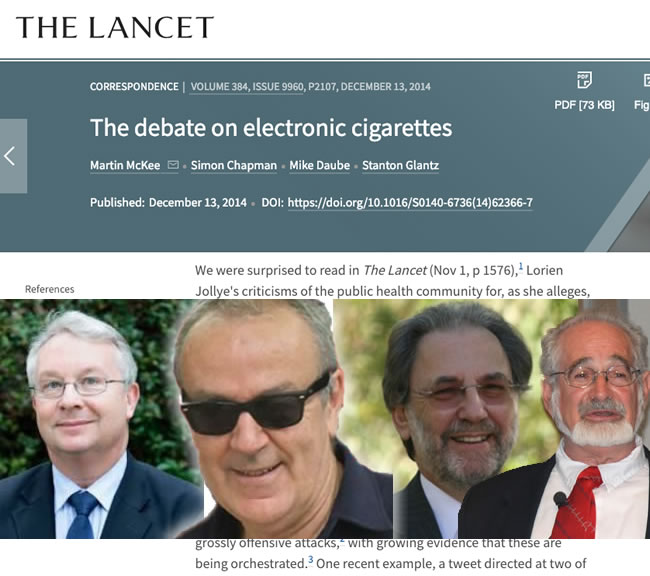 They, David Bareham and Simon Chapman launched numerous sarcastic tweets attacking vapers, Lorien, and harm reduction experts and groups. It has been a consistent pattern of poor behaviour for the last five years.

Following The Telegraph’s “Death Threat” article, Lorien wrote on Twitter: “Did the Telegraph actually do ANY research on this 'experts & death threats from vapers' thing? Did they genuinely just take these guys at their word because they are 'experts' without looking at what happened?”

“It’s been YEARS since anyone could contact them yet they have continued to maintain their victimhood. Why? …They still trawl the feeds of people they've blocked. They still mock & sneer.”

“The behaviour of McKee, Glantz, Chapman, Daube, Bareham, Ireland & especially Ashton was & remains appalling. They are bullies that have sought to silence harm reduction voices with whatever means possible. They've slandered us.”

“Not just us - members of the public - but academics too. They've trolled, demeaned & belittled anyone who doesn't agree with them in public, journals, newspapers & closed socme groups. They enlisted journalists to spread their tripe unquestioningly ... and they get away with it. They are still getting away with it.”

It is impossible to understand the justification for the Telegraph’s decision to carry these articles. No sound science has been offered up, no debate has been furthered, just the espousing of more smears and lies. The behaviour of this cohort of ardent anti-vape campaigners remains laughable and wholly unprofessional. It is long gone time that media organisations ceased giving them a soapbox. 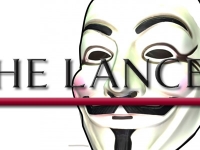