The Right Honourable Norman Lamb MP, Liberal Democrat MP for North Norfolk since 2001 and chair of the Science and Technology Select Committee, spoke to the Ecig Summit about evidence and regulation. During his talk he took time to criticise the world health organisation, those who accuse him of Big Tobacco links, and The Lancet.

“Talking about significant developments, only thing that’s going on down the road as we speak,” Norman Lamb opened. We had a Prime Minister at the start of the presentation, but it was unclear if there would be one by the time Lamb stopped speaking, he joked.

“My role is chair of the Science and Technology Select Committee. We have a committee of eleven; including Conservatives, Labour and an SNP. Our job is to look at the evidence on a whole range of issues including, in this case, e-cigarettes – looking in particular at their potential role to stop people from smoking, given the extraordinary death toll in this country from smoking related diseases.”

“Our job is also to scrutinise government, challenge, and make recommendations for change. And, to do this, we gather evidence from people such as yourselves, as well as governments, public bodies, academics and professional organisations. The work is strictly evidence related.” 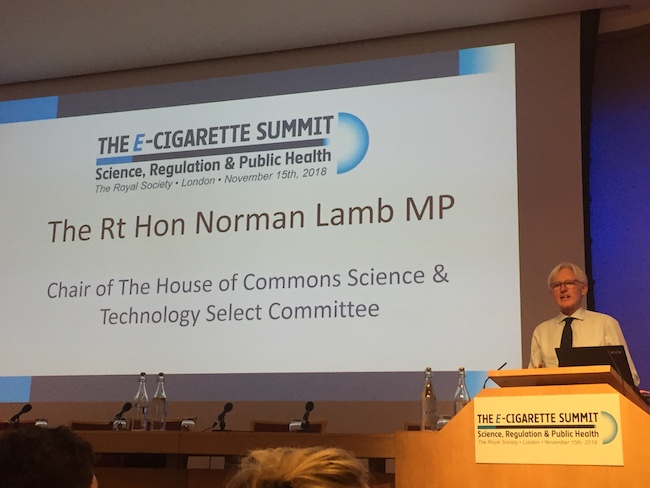 This is pertinent coming just days after David Bareham, a physiotherapist, accused Lamb of “tobacco industry collaboration”, on Twitter.

“I get accused of being in the pocket of the tobacco industry on social media, regularly defamed in all sorts of ways, but I’ve decided the best thing is to just ignore it rather than get involved in legal action – but we always focus on looking at the evidence and to make conclusions on the basis of that evidence.”

“I’d encourage you all to get involved in our future enquiries – the more people we hear from the better.”

“Smoking is the primary cause of preventable illness and premature death, accounting for approximately 79000 deaths per year in England. As many of you know, there’s a growing consensus that electronic cigarettes are significantly less harmful to a person’s health than conventional cigarettes. Public Health England’s review estimated that they are 95% less harmful than smoking tobacco.”

“We recently produced our report with clear recommendations to the government. We wanted to look at e-cigarettes because nearly 3 million people are now using them in the UK, and that they were seen by many as a valuable stop smoking tool.”

“…But did their use have an evidence base? That was the question we asked ourselves.” 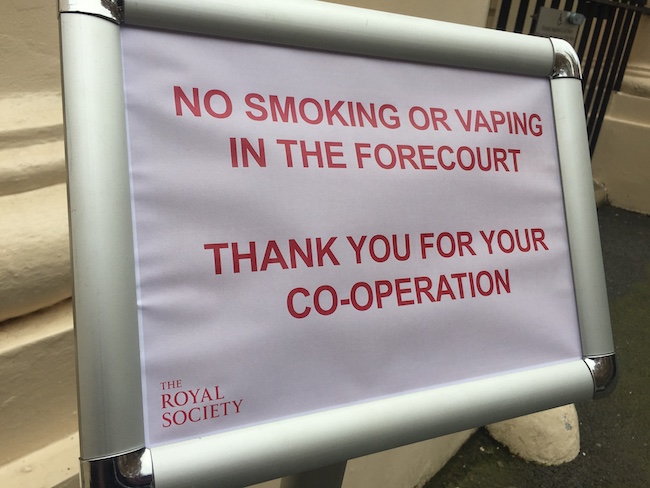 Over 90 individuals and organisations contributed to the evidence gathering exercise, including the aforementioned David Bareham, and 25 individuals who gave oral evidence – Bareham wasn’t invited to that bit.

“We heard a lot of evidence of the changes needed to current tobacco policy and the regulatory approach to e-cigarettes. We are waiting still for the government’s response to our report – that’s not unusual; it usually takes two to three months and it has been somewhat delayed, but maybe they have one or two other things on their mind at present.”

“In the interim, I’ve written to the Northern Irish, Welsh and Scottish governments, to encourage them to also take account of the conclusions we reached. I also wrote to the Secretary of State for Social Care, the European Commission, and the World Health Organisation (ahead of the COP8 session). It’s really disappointing from my point of view that the published decision from COP8 made no reference – no reference – to the importance of harm reduction.”

“I just find that quite extraordinary: the World Health Organisation not mentioning harm reduction and the potential value of e-cigarettes in reducing smoking rates.”

“Our report was very well received by a whole range of respected bodies. I was really disappointed by The Lancet in their opinion piece…”

Martin McKee, like Bareham, was not invited to give oral evidence. McKee has strong ties to The Lancet and is suspected to be behind its anonymous attack on the select committee’s report.

“…who cautioned against the conclusions we reached because of the uncertain evidence over the long term effect of e-cigarettes. It struck me that they were also guilty of failing to understand ‘relative harm’. Also, what I find surprising, is that they rushed out that editorial in The Lancet – I wrote a letter almost immediately to respond to it, but we are still waiting for them to publish it because it has to go through some very complex process to determine if it’s an evidence-based contribution. It didn’t seem to apply to their editorial, but there you go!”

Lamb then covered four aspects of the report: regulation, evidence of lower harm risk, use in mental health facilities (“something I feel very strongly about”), and use in open spaces. He mentioned his pleasure that advertising codes have been updated and said that vape products should be taxed appropriately in order to encourage smokers to switch. 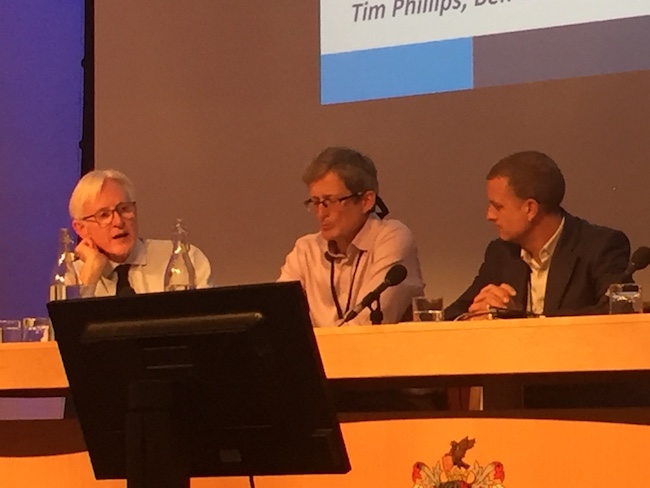 He lamented the fact that there has been no movement on a medicalised product, listed with the MHRA, as a medically licenced product would lend legitimacy to the claims of relative safety, encourage more smokers to switch and encourage more doctors to recommend vaping to their smoking patients. He also believes it would open up the possibility for factual claims of relative safety could be made in adverts.

“I just keep focussing my mind on those 79000 deaths from smoking, and if we can reduce that number then surely that would be something to be proud of.”

Among those with mental ill health, Lamb highlighted, 40% are likely to be smokers. There’s a health inequality taking place here, and quitting presents an additional problem to these people. To that end he demanded more action: “A third of Mental Health Trusts still ban vaping from their premises. Furthermore, a quarter of NHS Trusts are mistakenly concerned about second-hand e-cigarette vapour, despite evidence that it presents negligible health risk.”

He added, while stating Trusts need to supply evidence to justify banning vaping: “Isn’t it extraordinary that a third of them are failing to do what the best are doing? For a third of Trusts not to be following their lead, I think, is quite scandalous.”

Finally, Lamb rounded on those who are doing it by half measures and condemning vapers to smoking areas: “To put vapers in the company of smokers is just very stupid! For a health organisation to do that is just unbelievable.”