Doctor Konstantinos Farsalinos opened up the second session of the E-Cigarette Summit by looking at the prejudice and predisposition against vaping within the scientific research community. He gave examples of the bias and demonstrated how easy it is to select data to support an ideological agenda. 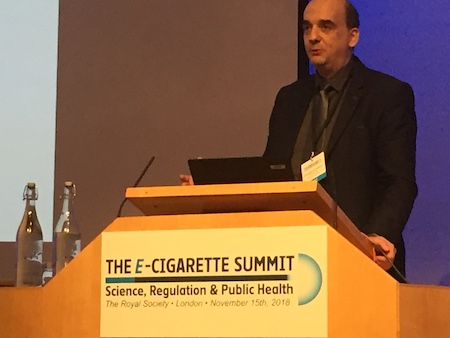 Dr Farsalinos began by making the audience laugh, with a promise to be brief. The leading light in vape research is nothing if not a slave to the truth, and the promise of brevity was consequently upheld. Albeit with a caveat: “Honestly, not as brief as you might think – but briefer than any other time.”

Research comes from questions and the answers generated simply raise new questions, the Doctor said, “so we have a kind of a circle, with progress of course, but we will never be out of work.”

“With tobacco harm reduction, I think there’s a lot of prejudice in the scientific community. It’s very obvious because scientists are always willing to look for problems rather than benefits.”

“You see, for example, lots of research about the gateway to smoking from e-cigarettes, but there’s very, very little research – I have seen only two studies – evaluating the opposite. And one of them was just a supplementary, presenting the opposite of the association.”

“The problem is always coming from the funding sources, which are mainly looking for problems. So when they release funding and ask scientists about the problems associated with the use of these products, of course, as a scientist, you need to present something about the problem.”

“A lot of the predisposition (of scientists) started from the name, which contains the term ‘cigarette’, from the fact that e-cigarette use looks like smoking, it is used like smoking (associated with the same rituals), and we are seeing this predisposition being expressed in scientific publications.” 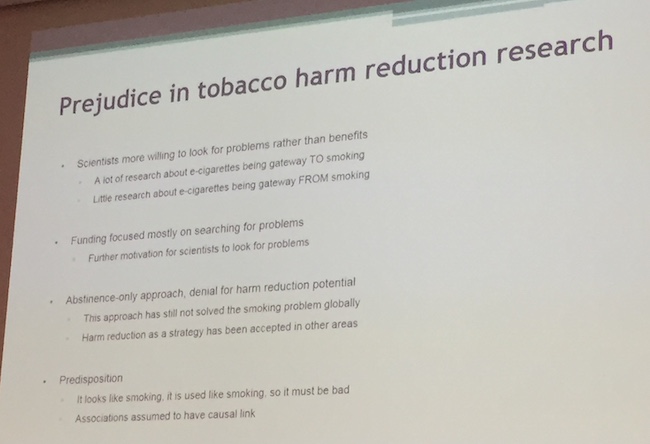 At this point Farsalinos offered up an example of such research, this being the Glantz heart attack study: Association Between Electronic Cigarette Use and Myocardial Infarction.

“Now what does everyone understand from that? They understand that there’s a causal link, because when you talk about the use of something increasing the risk, you have a temporal definition of effect…which of course can’t be determined from this survey which is a cross-sectional survey without any information on whether people who had a myocardial infarction were using e-cigarettes – before or after having a myocardial infarction.”

“To give you an example of how this association is wildly inconsistent, and probably explains why they chose the 2014 and 2016 data set, is that when we analysed the National Health survey of 2016 and 2017 for a link with heart disease we found absolutely no association.”

“But there’s an even bigger problem: it’s not just that we found an association in one data set and not the other, this causal inference that the use of e-cigarettes increases the risk of myocardial infarction – it’s a bit of a joke!”

“Yesterday, a letter to the editor of the journal that published the original study was accepted for publication, where we analysed the data survey for 2016-17 for a link between the prescription of anti-cholesterol medications and chronic heart disease. And what we found is that there’s a very strong correlation between taking medications for high cholesterol and having chronic heart disease.”

“Who is going to believe that? No one.” 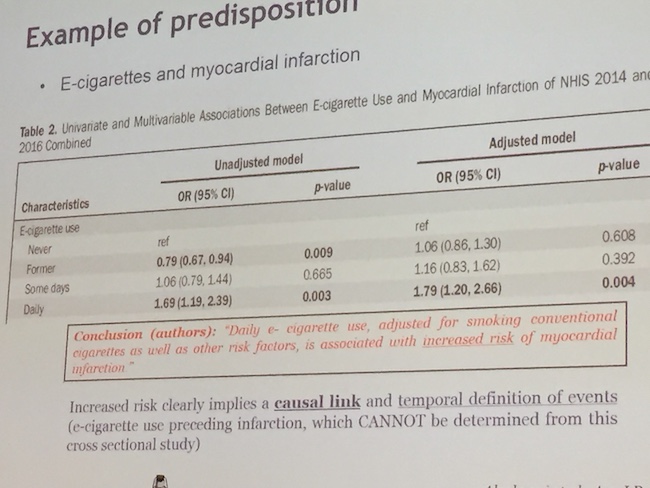 “The predisposition that the authors had about e-cigarettes led them to believe there must be a causal link. But obviously it’s not, that’s the real conclusion, and we’re saying that in the letter to the editor – and we ask for the journal to revise the conclusion statement.”

Farsalinos then took apart a bias study attacking heat-not-burn devices and claims that they found tar, “which is not a scientific term.”

“I think we are seeing an example of ends justifying the means, and what I mean by that is … parts of the public health community think that we should create the message that will help save specific conceptions among the population to help the goal of ‘we don’t want people to use nicotine’.”

“Whether you like harm reduction or not – you need to tell the truth.”