Scientists, public health professionals and policy makers gathered at The Royal Society in London, on Thursday, for The E-Cigarette Summit: Science, Regulation and Health 2018. Over four articles, we present extended coverage of the speeches.

Prof Virginia Berridge, Professor of History and Founder Director of Centre for History in Public Health at London School of Hygiene and Tropical Medicine, opened with an analysis of the history of policy, comparing the UK and Australia.

She asked: “Why are policies so unique to countries when the evidence is universal?”

“As a historian, I haven’t taken a position on e-cigarettes. The historical focus is really to analyse why things have turned out as they have – without a preferred end in mind.” 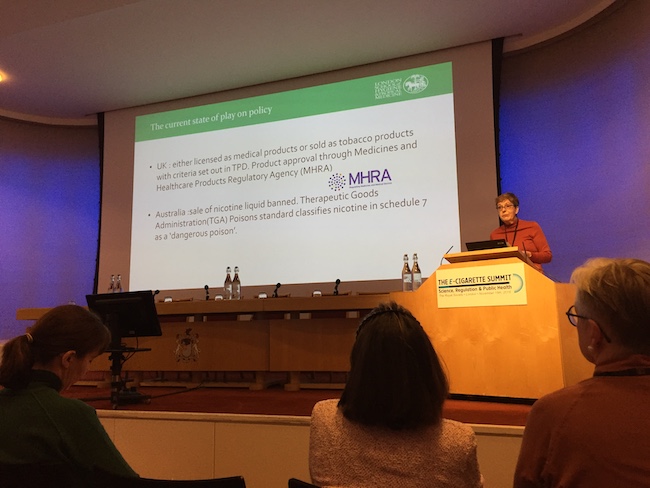 Prof Virginia Berridge explained how the UK differs in policy from Australia, but questioned why vaping was different to other aspects of public health: “in terms of harm reduction for HIV the two countries have followed a similar path and personalities have influenced each other.”

Michael Daube has been a driving force in policy development in Australia. When he was the second director of ASH UK in the 1970’s, “adopted a very anti-industry stance”.  Michael Russell (the originator of a harm reduction approach) influenced the way the UK developed its approach and is became cemented in UK institutions.

Berridge also explained how developments have been carried out in public in the UK whereas Australia didn’t adopt a consensus approach: “The way in which evidence is filtered needs to be appreciated in context of the past as well as the present. Evidence is important, but by itself it doesn’t form policy or policy change.”

Deborah Arnott stated: “a comprehensive tobacco control policy is essential to underpin a sensible harm reduction strategy,” and added, “smokers need to be switching, not dual-using.”

“We do better on all the measures that motivate quitting: we have the highest tax, the most comprehensive advertising ban (what the industry calls a dark market),” and then she listed off the other aspects in which the UK outpaces the rest of Europe. 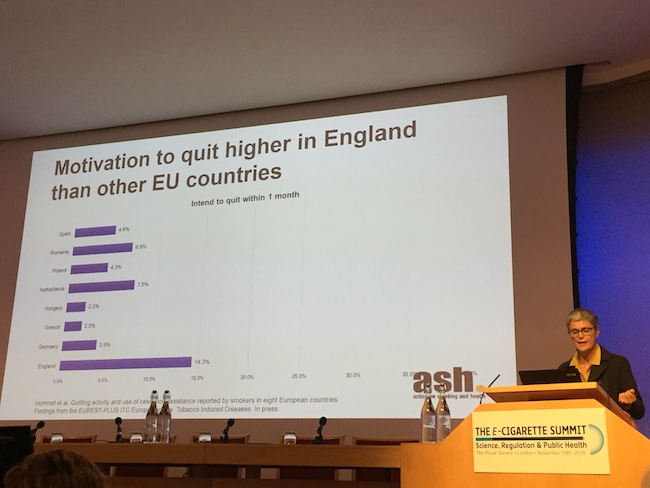 Topically, she spoke about the possible impact of Brexit: “Those of you who think that because we’re leaving Europe there’s going to be a massive opportunity and the regulations are going to change – I’m sorry, it’s just not going to happen.”

Karl Lund took the stage: “Good morning everyone, this is going to be a snus lesson.”

He began in 1986, explaining that Norwegians could either adapt to chilly outdoor smoking or switch to snus. And snus took off despite there being a negligible price difference, confusion over the risk difference, no risk-proportionate regulation, no advertising and snus not being recommended for smoking cessation. 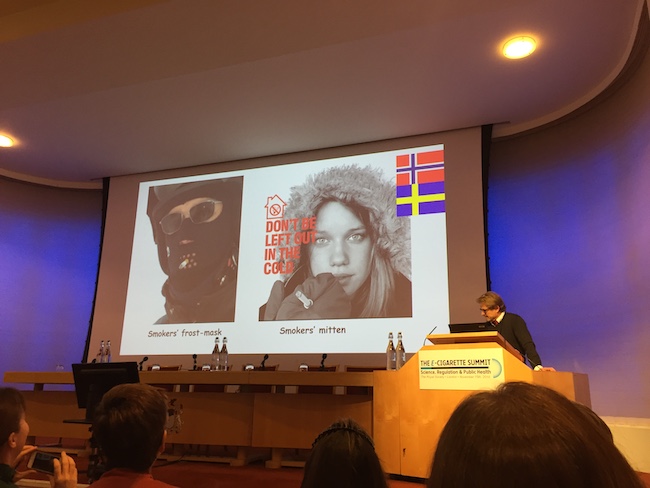 At the time, Lund was working to eliminate the use of snus. “It’s better to be safe than sorry,” his boss told him. It was all about “protecting the kids.”

New information caused Lund to revisit snus in 2006, findings that showed no gateway from snus to tobacco and plenty of other benefits.

“What has occurred in Sweden is now occurring in Norway – but with a time lag of 25 years. This change has been taking place in the face of health authorities without being embedded in any strategy.” 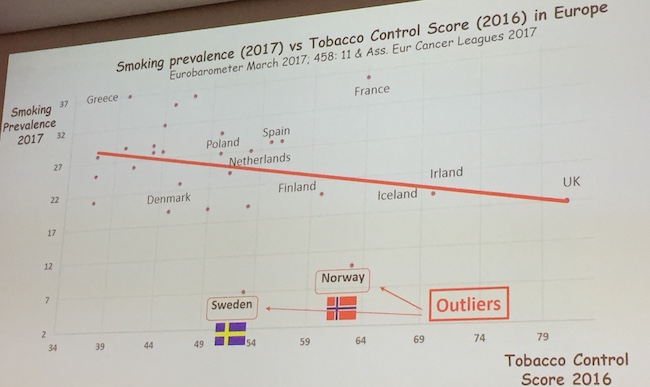 “But still, snus is the most frequent method of quitting smoking – and, for some reason, snus attracted the users who didn’t want to use NRT products.”

“Snus has produced a health gain for Norway and Sweden,” and encouraged Lund to embark on a tour of television studios to explain the benefits of the product.

“The Minister of Health, while protecting the kids with plain packs, said that I was serving the interests of the tobacco community. I think accusations like this is the price you have to pay if have decided to promote tobacco harm reduction.”