Sources in the United States are confirming that Scott Gottlieb, commissioner of the Food and Drug Administration (FDA), will announce a ban on the sale of most vape products from convenience stores (c-stores) and gas stations this week. Such locations will be allowed to sell poorly performing cigalikes only – to protect children from flavoured vapes.

Gottlieb has prefaced the announcement by issuing a statement: “My deep concern about youth e-cig use, and my goal of advancing innovations to help adult smokers quit, stems from the overwhelming burden of smoking related disease and my own experience as a cancer survivor, doctor who treated patients with dreadful smoking related illness, and as a father of young kids who hears every day from parents very worried about the use of e-cigs by kids and growing teen addiction to nicotine. We all need to work together to reverse these trends. We can't allow a generation of kids to get addicted to tobacco products.”

The FDA still hasn’t released the data supporting its claims of a teenage epidemic.

“To promote the goal of transitioning adult smokers off of cigarettes,” continues Gottlieb, “we’ve advanced many steps to promote innovation not only in electronic nicotine delivery systems but also medicinal nicotine replacement therapies. Our record advancing policies aimed at these goals is robust.”

“But I’ve said many times, starting with my confirmation hearing and my first address to FDA staff; I won’t allow policy accommodation we take to promote innovation to come at the expense of an epidemic of use of tobacco products by children. We are now witnessing that epidemic.”

Again, the FDA hasn’t corroborated this claim and all the evidence points to it not being the case. Pronouncements of a teen epidemic are as “robust” as the FDA’s claim to have supported innovation in the ecig market.

“Alternatives to sensible measures making it harder for kids to access these products are policies that could more sharply foreclose these innovations. Those more blunt policies could be easier to implement. But FDA is trying to carefully balance competing public health priorities.”

The imminent move has been described as an act of “stupidity” and has been likened to The Prohibition. Paul Blair, director of Strategic Initiatives said: “He's actually doing this. Seriously. This unprecedented move towards prohibition will harm years of efforts to switch smokers to less harmful alternatives. Smoking rates are at an all time low because of e-cigarettes and yet Scott Gottlieb has given into the fear mongering.”

“When an adult smoker walks into a 7-11 in Gottlieb's America, they will have a few choices which include and will always include: Marlboro, Newport, Camel. Options those same adults won’t have now? JUUL and any other e-cigarette which is 95%-99% less harmful. The e-cigarette products Gottlieb is willing to leave on the market, in convenience stores, are the ones no one buys - tobacco and menthol flavoured ones.” 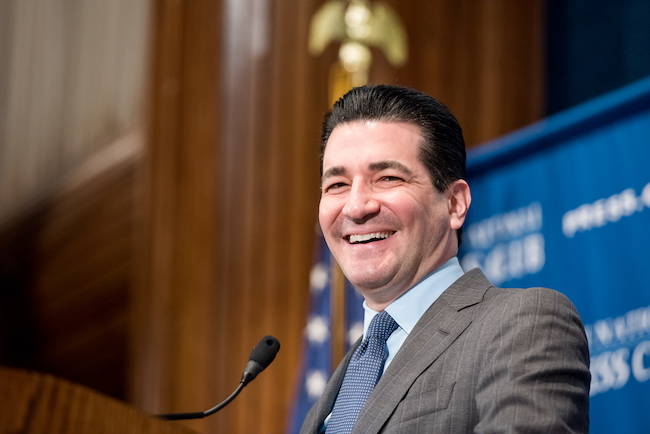 In addition to the ridiculous situation of banning vape products but allowing cigarettes to remain on sale in those locations, Clive Bates points out that this is also “discrimination by socio-economic status.”

Bates says: “Juul users are from higher SES [socioeconomic status] backgrounds and likely to quit. Poorer kids are more likely to continue through to longer-term smoking. For them, the more at-risk population, [Gottlieb is] narrowing the 'off-ramp'.”

If assumptions are made that there is a teen vaping epidemic (which there isn’t), then how effective is banning sales from c-stores?

Research by Yale School of Medicine, published in 2017, looked at where youths source their vape gear. The study found: 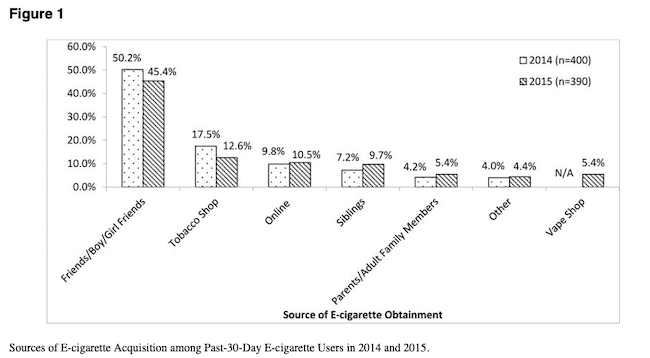 4-4.4% of purchases were made from sources like c-stores and petrol stations. It is clear from the graph that the FDA’s ban will have very little impact on teenage vaping other than making it more attractive to risk-seekers.

Inferior vape products with tobacco, mint and menthol flavours will remain on sale because “the agency doesn’t want to give traditional cigarettes an advantage over e-cigarettes”. It states that should the ban not produce a decline in teen vaping then these products will also be banned irrespective of this being the cause.

They wrote: “It is a positive step that the FDA recognizes the critical role flavours play in the skyrocketing youth use of e-cigarettes and is planning action to reduce the widespread availability of flavoured e-cigarettes. But the details will be critical, and the FDA needs to go further.”

The collective call for a ban on all eliquid flavours, a ban on all online vape sales, and the immediate enforcement of the rules banning the sale of new or changed-after-2016 vape products.

Charles Gardner, The Foundation for a Smoke-Free World, responded: “Your call for a complete ban on flavours is based on an evidence-free assumption that such bans will discourage teen vaping. Just a generation ago, 30% of teens smoked cigarettes. When you discover that San Francisco's and the FDA's flavour bans have no impact on teen vaping, what then?”

“Severely restricting the availability of these devices does not seem to be in the interest of public health,” commented Gregory Conley, the president of the American Vaping Association. It is clear that the only people who will vape less or not at all are the smoking adults who may otherwise have been attracted to making a switch in-store.

Tiana Lowe, writing in the Washington Examiner, opines that this is “the latest episode of the nanny state run amok.”

“As with most things we put in our bodies, vaping does come with risks. E-cigarettes were specifically designed to wean smokers off of cigarettes, so vaping delivers nicotine. However, Public Health England found that e-cigs are only 5 percent as harmful as actual cigarettes. The research in the U.K. demonstrated that just 1 percent of all vapers picked up a regular vaping habit after never smoking before. Thus, vaping is being consistently used for its intended purpose, with very few outside consequences.”

Manufacturing companies and effected retailers are already looking at what legal options they have in front of them to challenge the ruling.