The Sony VTC5 cell is very popular with vapers for it reliability and build quality. Recently, Amazon shoppers in the USA and the United Kingdom received emails warning them that the cells should not be used in vape products.

One of our POTV forum members wrote: “So, bought a couple of VTC5s about a year or two ago, and have just received an email from amazon stating that the batteries I purchased should DEFINITELY not be used with any products related to vaping as they can be dangerous and a link to an announcement from Sony about the whole thing...”

The Sony website carries a similar warning: “Caution: The use of Sony's Li-Ion Cell battery in eCigarettes and vape pens is not advisable.”

“Sony has great concern for the safety of our consumers. We recently became aware that some people may use our cylindrical lithium-ion VTC battery cells ("Li-Ion Cells") in a way that Sony does not intend for them to be used: in eCigarettes and vape pens.

“Sony has not tested Li-Ion cells in eCigarettes and vape pens. Because of the high power, Sony Li-Ion Cells require safety precautions and mechanisms to make their use safe. Sony is not aware of eCigarettes or vape pens that have such safety mechanisms.

“Misuse of Sony Li-Ion Cells in eCigarettes and vape pens may cause a serious risk to personal property and safety. The Sony Li-Ion Cells are sold to manufacturers and meant to power products like power tools that contain certain safety precautions and mechanisms which meet our quality standards.” 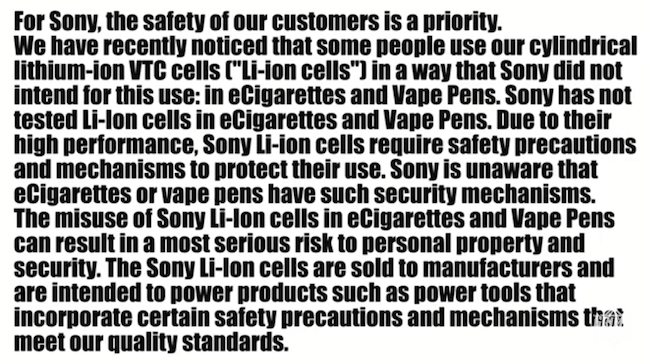 Does this mean that vapers should recycle their stock of VTC5 cells?

Absolutely not. If used correctly, within the cell’s parameters, the Sony batteries will provide a safe and reliable source of power for your mod and atomiser.

Sony is covering its back in case of an accident due to misuse…and any negative press that might come its way. Recent cases of devices exploding have led to journalists seeking to contact other cell manufacturers and re-wrappers (like Efest).

The Battery Mooch, widely respected for his testing of cells used for vaping, made the following comments about the VTC5:

Mooch states: “This is a great 20A continuous battery that exceeds its 2500mAh rated capacity, meeting its nominal capacity of 2600mAh. The VTC5 hits as hard as the Samsung 25R5 and runs a bit cooler. Due to its higher capacity the VTC5 runs a bit longer than the 25R before needing recharging.”

For new vapers, or old hands looking to learn more about batteries, Mooch has a YouTube video channel with a collection of excellent videos.

POTV recommends you buy from a trusted retailer to ensure that you do not end up with a cloned battery. 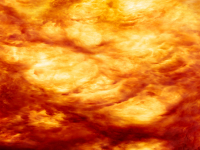 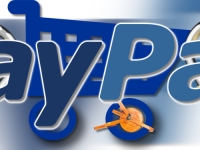