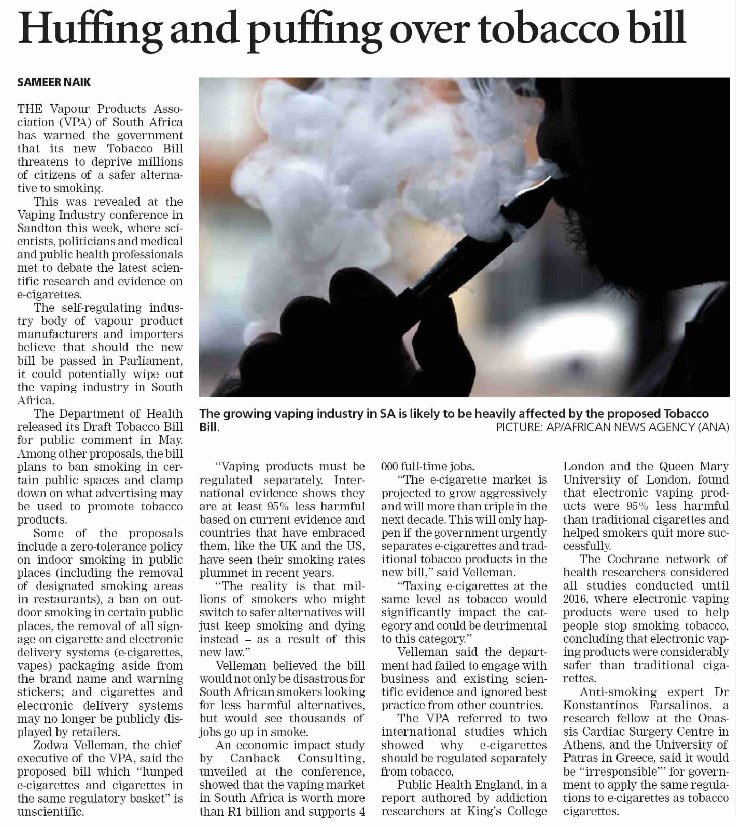 Vape products and vapers will have to deal with the proposed restrictions to limit use in public places, a ban on vaping at home in private if anybody is employed there, crushing harm reduction advertising and limiting any communication about the benefits vaping offers over smoking. Crucially, vape products will also be included in a ban on distance selling over the Internet and there is an implication all packaging will have to be plain.

The South African government has taken its direction by following the World Health Organisation (WHO) Framework Convention on Tobacco Control (FCTC) articles and guidelines to the letter, although it claims it is carrying out a more even-handed approach to tobacco harm reduction.

Zodwa Velleman, chief executive of Vapour Product Association South Africa (VPASA), said: “The bill threatens to deprive millions of citizens of a safer alternative to smoking. E-cigarettes are 95% less harmful and the current vaping market is worth more than R1billion.”

The organisation has pointed out that vaping has offered more than just a great route out of smoking addiction. As the market has booomed, the overall price has dropped and they believe offers a 7% reduction in cost over a 12-month period.

Also, according to VPASA, if left unimpeded, the vaping market would generate over 10,000 new jobs over the next ten years. “Vaping products must be regulated separately.  International evidence shows that the countries that have embraced them, like the UK and the US, have seen their smoking rates plummet in recent years.”

Problems for the government begin with its own impact assessment. By its own admission, the authorities don’t understand vaping or the benefits of tobacco harm reduction. Plus, the government accepts its new law “will significantly reduce the growth in the [vape/harm reduction] market,” and, in turn, “this in turn will have detrimental consequences for the manufacturers, importers, wholesalers and retailers of these products.”

Velleman continued: “Tobacco companies are powerful. They can no longer advertise the lifestyle and the red cigarette boxes, so now they are shifting tactics. I don’t believe that people have a choice as they market it; about 70% of smokers wish to stop smoking, 35% go on to try to stop every year but only 3% successfully quit. I don’t believe that the addictiveness of nicotine can go away so easily.”

So far, vaping has created more than 4,000 South African jobs. In addition to the threat to future market growth and restricting smokers to duff NRT products, these jobs will be placed at risk. 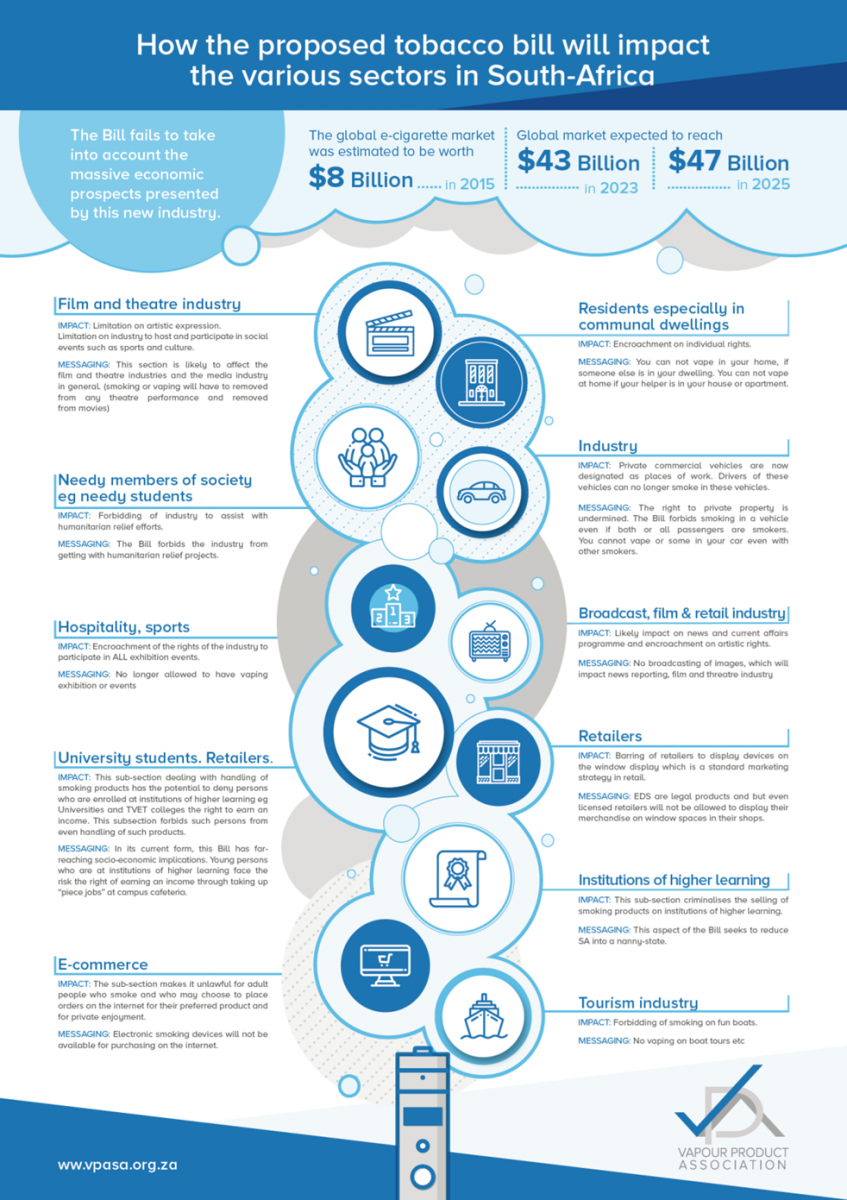 “Secondly," continued Hadebe, "the Bill seeks to make it unlawful to use e-commerce to process purchases and as you know, e-commerce is the way in which business is being done these days. These are just some of the business concerns we have and we will be robustly engaging the Department on these issues.”

Canback Consulting has got involved and produced The SA Vaping Market Report. From it, Hadebe adds a warning: “In addition, we have further evaluated the impact of a significant price increase of vaping through a tax-based scenario, similar to markets where EVPs are taxed equivalent to tobacco-based products.” It doesn’t look pretty, with vapers being priced out of harm reduction and returning to tobacco products.

The proposals stand to crush an annual 10% growth in the vaping market, a growth that Canback associates with declining smoking rates.

Never one to let governments get away with unchecked acts of stupidity, Clive Bates has written comments to the draft proposal.

In conjunction with Ray Niaura and David Sweanor, the trio write: “The draft legislation is almost completely disproportionate in its approach to tobacco harm reduction technologies. It mostly treats reduced-risk products as though they are the same as smoking products. The alternative philosophy, which we advocate, is to adopt ‘risk proportionate regulation’ that encourages (or rather, does not inhibit) smokers from using vaping, novel nicotine products, heated tobacco or smokeless tobacco products to quit smoking.” 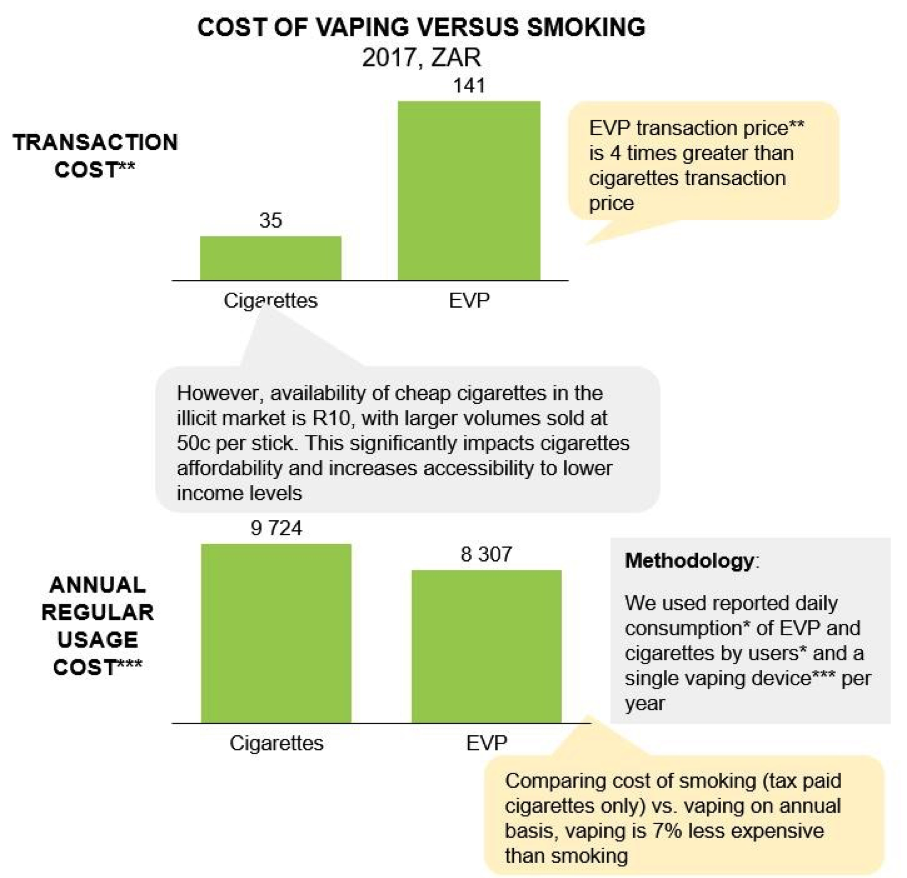 The full 20-page submission can be read here, but a summary of the main points is detailed on Bates’ blog:

For the sake of current smokers in South Africa and those working industriously in its vape industry, we hope that legislators listen to reason and temper its proposed law with some common sense.

Vaping offers smokers a quick route out of cigarette addiction at little to no cost to government, it’s a huge win-win for everybody – apart from individuals with a vested interest in keeping the old war against Big Tobacco going.