King, Ndoen and Borland co-authored a paper looking at the risk perceptions and misperceptions of cigarettes, ecigs and NRT therapies. What they discovered is that smokers tend to have fixed mind-sets and have difficulty processing the information about vaping being safer than smoking. 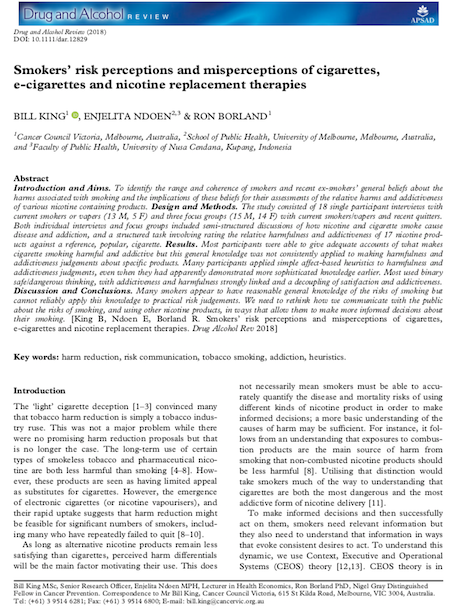 The team took three groups and got them to talk about their smoking/vaping history, what they already thought about nicotine and cigarettes/vaping/NRT, and their opinions about a range of products (placing them on a scale of harm) – and to justify their thought processes.

“There was little awareness that the addictiveness of nicotine is strongly related to mode of delivery, with cigarette smoking the most addictive form.”

The team pointed out a benefit of vaping: “The emergence of electronic cigarettes, and their rapid uptake suggests that harm reduction might be feasible for significant numbers of smokers, including many who have repeatedly failed to quit.”

But when it came to beliefs about non-combusted nicotine products, there was clear misunderstanding and confusion: “There was general agreement, especially in the focus groups, that e-cigarettes are not as satisfying as cigarettes and many participants held that that vaping is simply not an acceptable substitute for smoking; for example ‘Like I said, I tried the e-smokes... Even with the nicotine, I still wanted a proper smoke’.”

What will come as nectar to Simon Chapman, arch-opponent of vaping as a harm reduction tool, were the words: “The importance of affect was clear in participants’ judgements of e-cigarettes. If they did not like e-cigarettes, they tended to judge them as close to cigarettes in harmfulness. Similarly, those with negative feelings about e-cigarettes and NRT were likely to judge them as ineffective for quitting. Some also identified NRT as addictive and elaborated that NRT and e-cigarettes are no better than cigarettes, because they simply replace one form of nicotine addiction with another.”

Smokers appeared to be happy in their ignorance, because it justified them continuing to smoke, although some light shone through: “When talking about e-cigarettes, many used a ‘novelty’ heuristic, with novelty associated with uncertainty and danger. Some believed e-cigarettes are best judged as no less harmful than smoking, even if the available scientific evidence says otherwise.”

Incredibly: “Several also noted that the lack of trusted information sources makes them unwilling to consider using e-cigarettes. For these participants, the uncertainty surrounding the harmfulness of e-cigarettes was more threatening than the well-characterised and very high level of harm from cigarette smoking.”

The paper recounts a conversation demonstrating the willingness to negate any potential benefit:

“S1: I really do not know about these things [e-cigarettes]... [reading packaging] Nicotine free. So what is in them? Does it say? Nope...

BK: So you find it surprising that they do not actually tell you what’s in there?

S1: Hang on... Here we go...Propylene glycol, oh my god! Yeah that sounds pretty damn wrong to me. [other content on related topics, then this summary] But stuff that I do not know about, I’ll remain pessimistic about.” 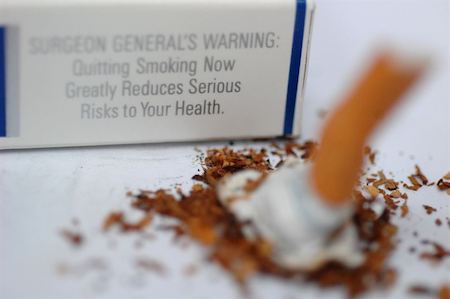 In general, the team found that smokers:

‘I still have this concern that just because something’s vapour borne, rather than smoke borne, that it’s still not necessarily that great for your lungs....’

These results are borne from ridiculous policies and pronouncements from the Australian government and public health mouthpieces. It has never been more important for the lives of Australian smokers that those in authority start taking note of Public Health England, the Royal College of Physicians, the BMA and the laws put in place in Canada and New Zealand. 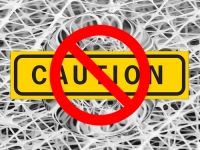