Jeremy Vine’s two-hour Radio 2 show had a ‘debate’ about vaping on Friday. The show may have begun with Style Council’s Walls Come Tumbling Down, but objections to vaping certainly didn’t. Listeners tuned in to hear about the attempted murder of a parachute instructor, the resignation of Margaret Thatcher, Terry Walton's allotment and vapers agreeing with the objections to vaping.

No worries – although Angela Epstein, journalist and writer, who’s not happy with “the big clouds of smoke”, would be whingeing about vaping, at least The London Vape Company’s Niall De'Ath would speak up for vapers and vaping. Right? 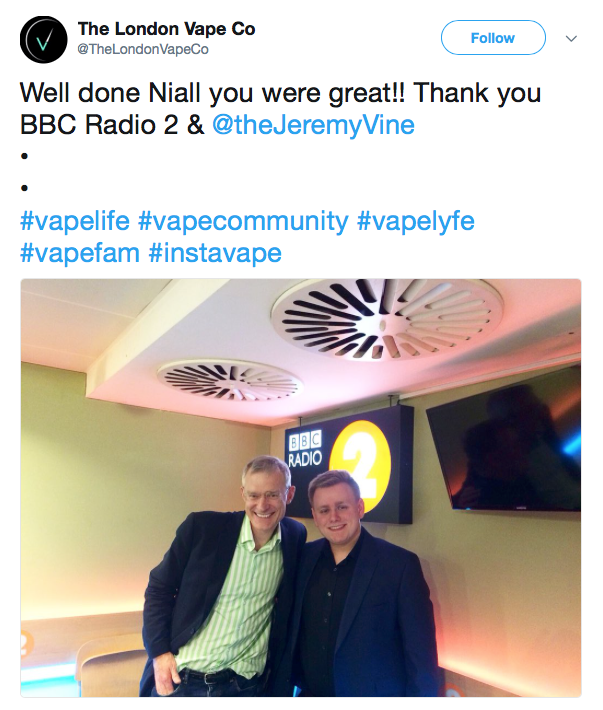 Vine felt vaping needed no introduction, so he gave it a massive introduction: “In the past few years the numbers of people using e-cigarettes has really ballooned – and now there are almost three million. It really is rocketing. Initially driven by people wanting to quit smoking, vaping has become the new social norm. High streets across the country have vape shops in them.”

“How socially acceptable is it to exhale a huge cloud of vapour in the path of other people? It used to be the case that non-smokers would wheeze and frown when strolling through a cloud of second-hand tobacco smoke.” Did it, Jeremy? What’s it like these days? “Now, non-vapers are frequently confronted by huge billows of sickly-smelling vapour, straight from the lungs of ecig users. These vapour clouds are often greater than the plumes caused by traditional cigarettes.”

Fortunately for everybody, Vine gingerly touched base with a genuine fact: “Although the vapour that comes out of them is much less harmful than cigarette smoke, how acceptable is it to vape in public where other people are present and might be engulfed in your smoke? Has that happened to you or are you proud of your plumes?”

Given that he didn’t take a single phone call, the question was redundant.

Vine asked De'Ath to get his mods out. He showed Jezza his “Series 1” device, which the audience can assume was a basic 1st Generation vape product. Then he pulled out his big box mod, a subohm device. This, he told Vine, “produces a lot of smoke”.

“Wow,” said Jeremy, clearly impressed. “I’ve never held a hand-grenade, but this must be like that. This is a substantial thing.”

A what now? This is the point where De'Ath can leap in to correct Vine’s choice of words. “Mmm,” he said.

So we continued with the onslaught on the box mod: “So, those are the ones that are causing the problems?”

“They are indeed,” De'Ath capitulated without even attempting to put this so-called issue into perspective.

Vine continued with his unopposed loaded choice of language: “Do you want to light it up, to show us what it can do?”

So, to offer balance and common sense, De'Ath leapt at the opportunity to show off in the studio. “OH GOSH! THAT’S CRAZY! That’s insane,” wowed Vine as a cloud filled the small room. Any vapers listening would have agreed, crazy and insane appears to sum it up aptly.

Thus far, the person speaking against vaping had yet to put in an appearance, but vapers had already been painted in such a bad light it didn’t seem as though she would have anything to add. Hang on, who’s this walking through the door? Jonathan Ross – celebrity, brother to Paul and vaper. Yes, as an intelligent man and committed vaper, Ross would interject with some sense.

“So, you’re passive vaping right now,” Ross said to Vine. And they all laughed because, presumably, talking about passive vaping on a nation radio show as if it’s a real thing is hilarious. “You’re going to be wheezing all the way home!” 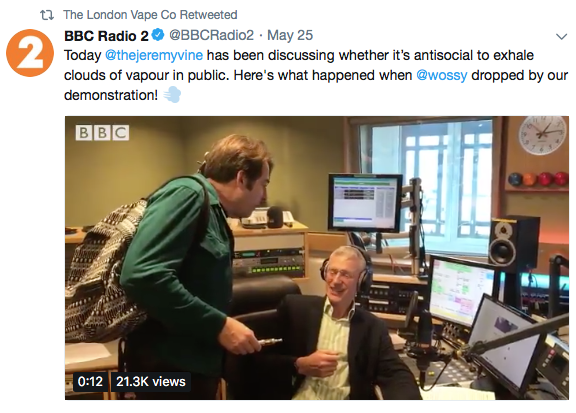 Vine complemented Ross on his tiny device to which De’Ath added that it was “more professional” because it emits less vape.

If only there had been someone in the studio to clearly respond and clarify the full benefits conferred by vaping compared to smoking: “Generally, well I mean, coming across, we have the NHS, which did their own independent research, and they found that comparative to smoking vaping is 95% better – which, of course, was across the headlines as much as possible.”

We cut to Epstein who is in “the sweet, beautiful air of Salford. It’s really lovely, my lungs are lovely and clear.” She resents breathing in “your noxious, synthesised odours”, but sounds surprised that nobody has really spoken up in favour of vaping.

So, given that the primary target had been well and truly hit – Epstein opted to whine about smelly people and people eating on trains, before going back to her objection to “plumes of smoke”.

Not once did anybody point out that vaping doesn’t produce smoke.

Vine then cut to the subject of mod safety, to which De’Ath blamed early, unregulated Chinese market for exploding devices, “we did see some issues. Predominantly, nowadays, everyone has very secure electronic safety measures, and battery venting safety measure. The worst offenders are something like a mechanical mod which, unlike this device, is not a regulated power output. In those cases we can see damage occur. And that’s what we advise against.”

With almost every aspect of vaping now trashed, Epstein rounded off with a self-entitled plea for people to not blow vape around in open public areas. Then, for good measure, she had a go at dog owners and women who breast-feed.

It’s possible that this could have gone a whole lot better. 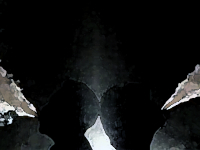