Big Pharma is not a character in the Viz comic, concerned with interlopers on crop fields or raising giant chickens, but the latest vape-related study is almost as amusing. Despite stating that young people don’t vape as much as older vapers, a variety of flavours apparently compels them to vape more.

The pharmaceutical industry has been hit by an increasing number of quitters opting for vape products rather than use their old and failed nicotine replacement products. Big Pharma watched revenues tumble while people turned their backs on inhalers, patches and gum in droves.

Big P’s response was to go dirty, hitting out below the belt with funded fear stories and dodgy research. Despite selling an inhaler containing a lot of the similar constituents as eliquid, a number of initial attacks erroneously cited anti-freeze as a juice component.

Then its agents went after the flavour additives, perceiving this as being a weak spot in vaping’s flank. Now, in this study, researchers combine a fear of flavours with the terror of teens taking up vaping in place of smoking. The team claim, “the funders had no role in study design, data collection and analysis, decision to publish, or preparation of the manuscript”, but US academic centres that rely on future funding sources rarely seem to produce positive vape studies.

It isn’t stated, but a clear motivator to carry out the research is an unproven assumption that vaping leads to smoking. If somebody popped into a coffee shop on his or her way to the cinema it doesn’t mean than caffeine leads to a film addiction. Conversely, if a person loaded up on fruit and muesli before having a fry-up, and then decided against one because they felt full, then the breakfast could be considered a safer disruptive intervention that prevented a more dangerous practice from taking place. 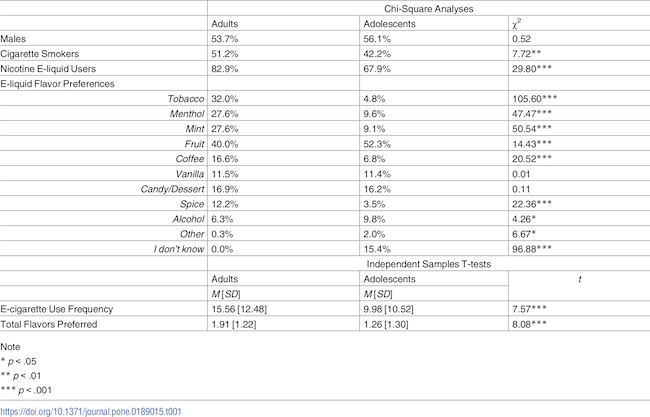 “The use of flavoured e-liquids has been linked to e-cigarette use in adolescents and adults, the relationship between the preferences for specific flavours and the frequency of e-cigarette use is not well understood,” write the team. Readers of the full study will be amazed to discover that there is no increase in any understanding by the end. 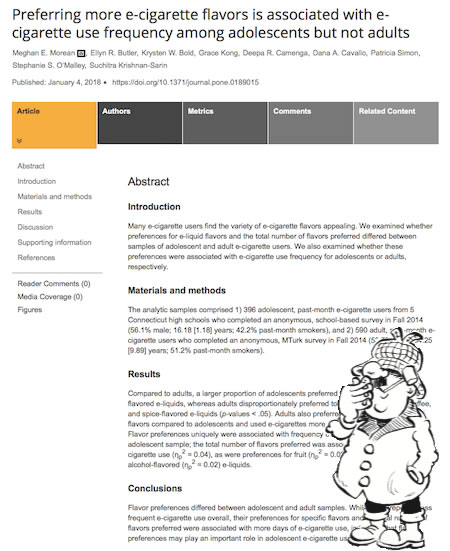 What a reader gets is the knowledge that tobacco, menthol and spice flavours are more popular among adults than teens (clearly because of the link to smoking cessation), whereas the majority of young people opt for fruit and candy flavours.

The lack of comprehension the team has developed over the course of their investigation is staggering: “It is not immediately evident why adults may be more likely to prefer non-sweet flavors like spices. However, adults may disproportionately prefer coffee flavors because they are more likely than adolescents, especially younger adolescents, to drink coffee.”

They use their absence of facts to make suggestion as to how regulations could be informed by this piece of work: “Given that the FDA’s regulatory authority now extends to e-cigarette products, the current findings may inform efforts to regulate e-liquid flavour additives. For example, although the availability of multiple e-cigarette flavours may have a positive benefit for adult smokers who are using e-cigarettes as a substitute for cigarettes, the availability of sweet flavours (e.g., fruit, candy) may contribute to youth e-cigarette use.”

It would be amusing were it not distinctly probably that this paper will be referenced in future and cited as evidence for the prohibition of certain flavours.

Farmer Palmer images were stolen without permission from http://viz.co.uk, where you can take out a subscription for a comic that is now 72% less funny than it used to be.