Polarisation in views was always likely to happen when a government has allowed a de-facto ban to be replaced with a real prohibition. It’s a technology seen as life saving in the United Kingdom, yet in Australia it’s the “our way or the die way” zealots who hold the whip hand. 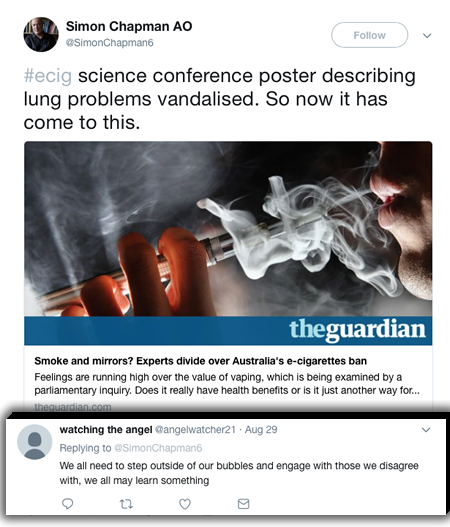 “Ecig science conference poster describing lung problems vandalised,” cried Simon Chapman on Twitter. The retired academic still feels compelled to keep sticking his oar into the vape debate, it’s almost like he loves to wind up those who believe in harm reduction. “So now it has come to this.”

Given that he has probably done more than anybody else to diverge opinions into an ‘us and them’, such anger shouldn’t come as a surprise. In truth it probably doesn’t, it serves his agenda for vapers and harm reduction campaigners to be seen as the bad side of the argument. ‘Oh look,’ he’d write, ‘they have nothing constructive to say so they rip things down.’

Chapman is a screaming hypocrite.

“In public health, the orthodoxy of harm minimisation is entrenched,” writes Gareth Parker in the West Australian. “It’s a sound approach but, curiously, it goes out the window when it comes to a product that — at the very least — holds strong potential as an aid to assist people to quit smoking and avoid premature death.”

Chapman supports harm reduction everywhere else, but not for smokers.

Colin Mendelsohn picks up Parker’s theme in Medical Republic: “The Australian Medical Association is to be commended for its recent position statement on substance use which includes harm-minimisation strategies and a compassionate attitude to drug users. However, curiously, this enlightened approach does not apply to its policy statement on the most harmful substance use of all, tobacco smoking.” 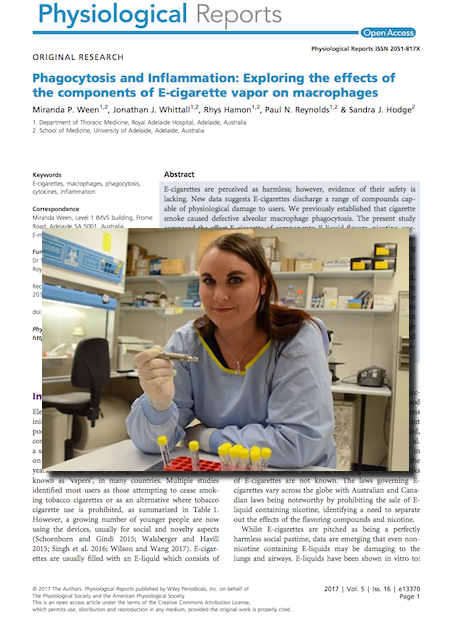 Chapman was vexed because Miranda Ween claims her conference poster had been vandalised and ripped from the wall. Ween is one of the breed of scientists who don’t smoke or vape but have identified the area as being a rich source of funding, and it’s easy to see why people have become angry at her approach.

Whenever she makes a comment in the media, at conference or in a study, Ween feels compelled to utter the inane statement: “E-cigarettes are perceived as harmless; however, evidence of their safety is lacking.” She has never explained who it is who claims vaping is safe, nor where they might have made such a claim – because nobody does – but she’s been banging that drum since 2015.

Questions can be raised about her methodology too. ABC News has a picture labelled “Dr Miranda Ween extracts vapours from an e-cigarette, as part of her research to find out if vaping is dangerous to our health”. It’s clear to see where flaws creep into her findings. Firstly, a process by hand gives no consistency for drawing the extract samples, and neither is there an indication of a method in place to prevent dry burning.

When scientists like Ween play fast and loose with the language surrounding vaping, and appear to use flawed methods in their research, then it is not surprising that The Guardian has cause to write: “Feelings are running high over the value of vaping”. Nor can Chapman’s continual goading be overlooked, he delights in trolling and insulting vapers and has no right to feel slighted when he cops some of his own medicine.

Smoke and Mirrors is an article by The Guardian’s Melissa Davey and well worth a read. 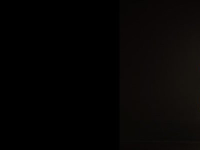 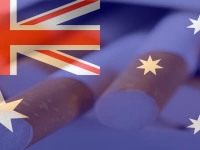