According to INNCO, the collective voice for the most influential nicotine consumer organisations in twenty-five countries, the Swedish government has taken a bold and positive move in the global effort to eliminate tobacco related disease. It has chosen to not provide written observations to the European Court of Justice (ECJ) in relation to a case being brought to overturn the EU ban on the sale of ‘snus’. 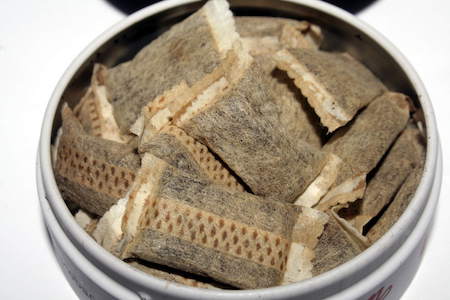 The New Nicotine Alliance (NNA) states: “snus fulfils the criteria for a tobacco harm reduction product and hence should be available in the UK. The legal ban on snus denies smokers of the choice of a much safer nicotine product than cigarettes.”

The NNA adds: “The introduction of snus into the United Kingdom would form part of a coherent strategy of tobacco harm reduction that help people avoid smoking. The current scientific evidence, and the fact that Sweden, where snus is used, now has the lowest lung cancer and tobacco-related mortality in Europe, indicates that snus is a suitable and appropriate product for individuals who are seeking to avoid smoking and other combustible tobacco products.”

INNCO reports: “Seventeen INNCO international member organisations wrote individual letters to the Swedish government, outlining their objections and concern were Sweden to choose, yet again, to submit an incomplete and misleading opinion on Snus to the ECJ.”

“‘Snus’ has a 200-year history of use in Sweden without any verifiable evidence of serious adverse health effects. It also remains the most widely used and successful method in assisting smoking cessation. Sweden now boasts the lowest smoking rate in Europe. The Swedish government has released data showing that the proportion of men aged between 30 and 44 smoking fell to just 5 per cent in 2016.” 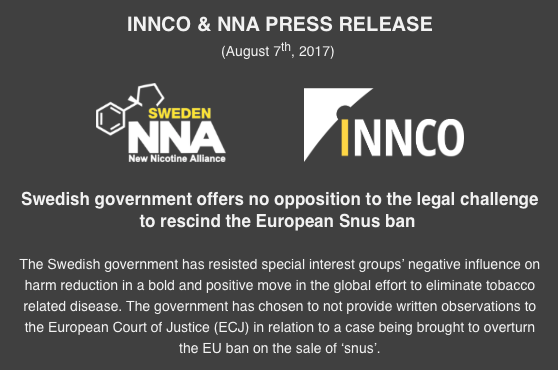 “Sweden is the only EU country in which citizens have legal access to Snus (having gained an exemption as part of their entry to the EU in 1995). Consequently, it is the only country in the world with access to reliable historical data and observations on long term Snus use. Sweden’s evidence is therefore invaluable to the ECJ and public health regulators currently deprived of qualitative Snus data, in the forthcoming re-examination of the current EU Snus ban.”

“We believe that INNCO’s global civil society initiative has been instrumental in influencing the Swedish government’s decision to offer no comment. In so doing, they have chosen to place the value of health and respect for human rights above ideology. The official government notification on their intentions is available here, together with an English translation here.”

A recent study supports the push to legalise snus. The latest evidence, presented by Peter Lee, epidemiologist and medical statistician, indicates that snus is at least 95% safer than smoking. Analysis by Lars Ramström, snus researcher in Sweden, shows that if snus were made available in Europe - where it is currently banned with the exception of Sweden - and similar use levels to Sweden were adopted, up to 320,000 premature deaths could be avoided among men every year. 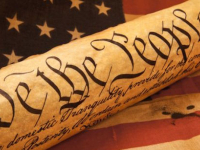