New Zealand has looked at all of the evidence, seen anti-vape campaigners for what they are, and firmly embraced tobacco harm reduction. The government has announced its intention to make electronic cigarettes legal with a set of proposals to create an environment softer than the Tobacco Products Directive does in the UK. 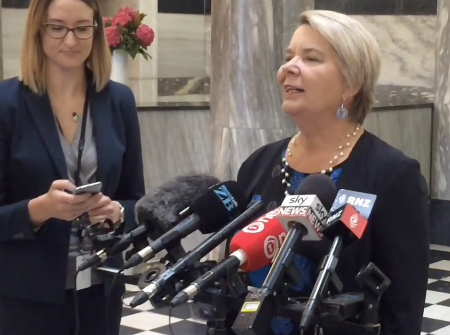 Associate Health Minister Nicky Wagner made the announcement at a press conference, where she said: “Today the government is going to legalise the sale of electronic cigarettes and eliquid. We are taking a low-risk approach and will be aligning the regulations around ecigarettes with ordinary cigarettes. We are walking a fine line in making ecigarettes available to smokers, as a harm reduction tool, but not encouraging non-smokers to take up the nicotine habit.

One journalist asked: “Aren’t you just encouraging the inhaling behaviour, to teach people how to inhale?”

Wagner, without making reference to the journalist inhaling between questions, responded: “Well, we’ve done a lot of work and looked at research around the world; there’s been no evidence that vaping is a gateway to smoking. One of the reasons is that the amount of nicotine you get in an ecigarette is significantly less than an ordinary cigarette.”

The follow-up question: “How is this going to help the government achieve its target of being smoke-free by 2025?”

The Associate Health Minister replied: “I think we’ve done pretty well with our target, we’re down to about 15% of New Zealanders who smoke, but there are pockets in our communities that have a much higher smoking rate and we are told that vaping helps them give up smoking – and we think we have to look at new technologies to give them a hand.” 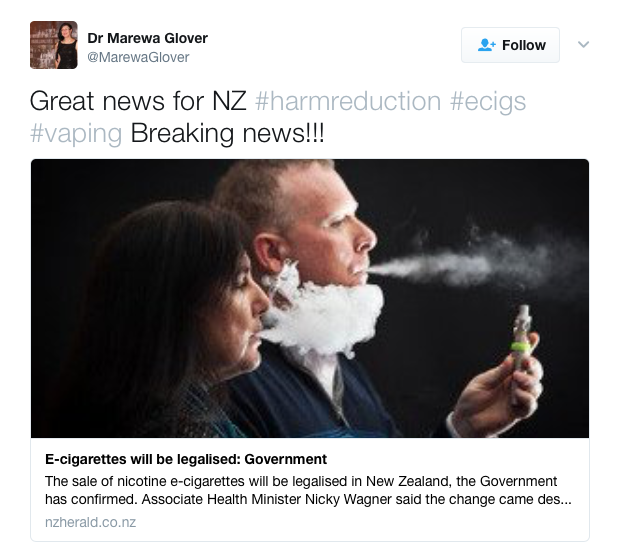 The enlightened approach obviously causes problems for people locked into the ‘quit with NRT or die’ paradigm. Janet Hoek, a professor of marketing and tobacco-free communications person at the University of Otago, is worried children will see point of sales displays in dairies and the like: “Smokers are not the only people who will see these displays and there is not enough detail as to how advertising restrictions will ensure children are protected from e-cigarette marketing. Overseas examples of e-cigarette marketing suggest these have used provocative themes likely to appeal to young people.” 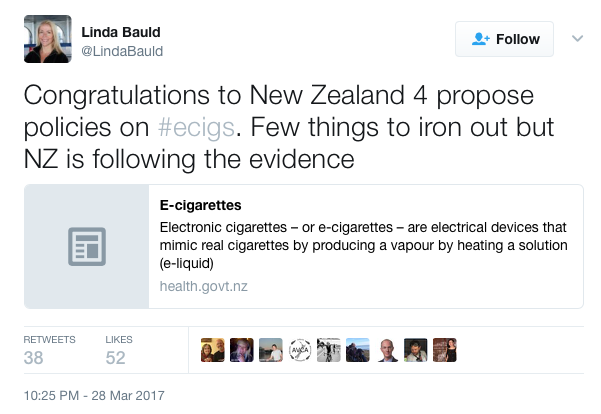 Hoek also believes that vape products should be priced the same as cigarettes, and not be a cheaper alternative to encourage switching from smoking. Fortunately, unlike in neighbouring Australia, such demonstrations of ignorance and stupidity are not being listened to.

The new regulations are likely to see vape products classified as consumer products and Marama Fox, co-leader of the Maori Party, has gone so far as to suggest the government ought to subsidise electronic cigarettes under the Medicines Act, in order to make switching an even more attractive proposition.

We believe New Zealand’s government should be applauded for taking a common sense and enlightened approach to harm reduction, and hope this puts added pressure onto the Australian and Canadian governments to rethink their blinkered and dogmatic plans.