Researchers at the University of San Diego believed that the Twitter social media micro-blogging platform held the answer to why vapers vape. So, they analysed the contents of three million tweets to find out what it was. Maybe they could have simply asked some vapers? They felt anonymously listening in on conversations was a better solution. 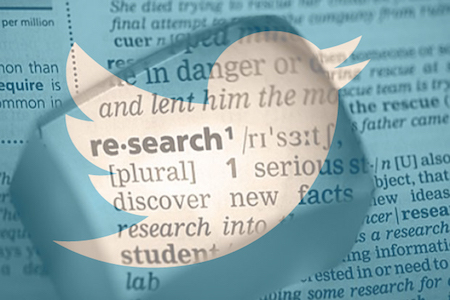 Reading people’s tweets as a funded research project isn’t a new idea. Anti-vape campaigners did just that in 2015, and then published the results in early 2016. It demonstrated just how closed their understanding was of the vape market – it only followed tweets talking about Blu cigalikes.

Then, later in 2016, a team from the University of Vermont published a similar study looking at the nature of vape advertising on Twitter. Being adults and not understanding Twitter, they felt: “The greatest concern of promotional e-cigarette marketing on Twitter is the risk of enticing younger generations who otherwise may never have commenced consuming nicotine.”

Because people vape because they saw an advert on a social media micro-blogging platform.

The recent San Diego study was led by John Ayers, who said: “Just look to surveys from the recent presidential election or Brexit as examples of surveys’ weakening ability to gauge public sentiment, attitudes or behaviors. But what if we could listen in to what people are naturally saying about e-cigarettes to their friends rather than a surveyor?”

They collected data from over 3 million English-language tweets published between 2012 and 2015.

During 2012, the main reason given for people taking up vaping was to quit smoking tobacco cigarettes. At 43%, it was twice the number of people who took it up because of vaping’s social image. ‘Being able to vape indoors’ was cited by 14% of people, prior to many places banning vaping inside. 14% liked the flavours, 9% preferred the relative safety, 3% were swayed by the cost benefit of vaping and 2% expressed happiness over the lack of stale smoke smell. 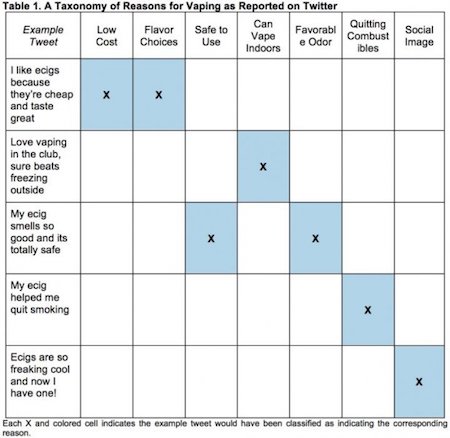 By 2015, the researchers noted the kind of reasons given had shifted. Vaping to quit cigarettes or to be able to be used indoors both dropped to 29% and 12% respectively. Lack of a nasty smell rose to 5%, but the outright leading reason now became the social image – it was “cool” to vape.

The team writes: “Our data suggest the reasons people vape are shifting away from cessation and toward social image. The data also show how the ENDS [vape] market is responsive to a changing policy landscape. For instance, smoking indoors was less frequently cited in 2015 as indoor smoking restrictions became more common.”

Jon-Patrick Allem, another research, commented: “The reasons people vape shifted away from cessation and toward social image during the time that e-cigarettes evolved from a cessation device to a freestanding tobacco product attracting smokers and nonsmokers alike. By utilizing Twitter, we can make public health more data-driven and understand vapers or those thinking of vaping.”

A third member of the team, Eric Leas added: “Some of the reasons people vape appear to be dubious. For example, vaping may be no less expensive than smoking combustibles, despite their naming that as a reason for vaping. Understanding how the public is potentially misinformed, rather than guessing, is a tremendous benefit for public health surveillance and practice.”

Chart – from the San Diego study 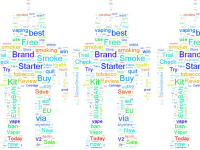 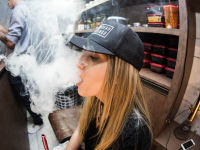