Vapers in Ontario managed to delay the imposition of imprudent anti-vaping measures but ecig users in Quebec are not so lucky. While the Canadian government fails to take the lead on harm reduction, individual provinces are making it up as they go along. 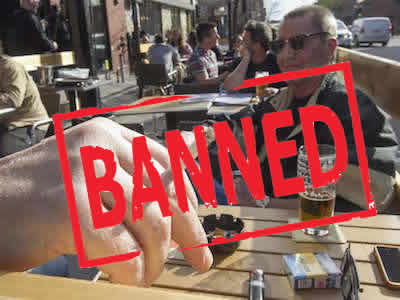 Quebec’s Law 44 came into effect on 26th May and brings into place many ridiculous anti-vaping measures laughably described as a “balanced approach”. Not only does it restrict where people are allowed to vape, it also attacks what eliquids they are allowed to use. As we reported last year: “As part of the crackdown on flavoured cigarettes, Charlebois has also managed to ban flavoured eliquid refills for cigalikes.”

Using an electronic cigarette is now illegal on the commercial patios of bars and restaurants. Likewise, vaping in a car containing a child is prohibited. How about if more than two residential buildings share a common area? Yes, banned from vaping there too. And campsites out in the countryside.

The Health Ministry says that they will send inspectors out to visit businesses to hand out fines but the police have also been given the power act. It is now the duty of business owners to display “No smoking, no vaping” signs and ensure customers do not enjoy a harmless vape out in the open.

Individuals who vape on a bar or restaurant patio face a fine of between £130 and £400. It is unclear quite why there is a sliding scale for these first offenders, maybe the inspectors will measure the size of the cloud exhaled? Repeat vape offenders can look forward to a £265-800 fine. The business owners will also be fined £265 to £6,500 for first offences and then £530 to over £13,000 for repeated transgressions. Quite how they intend on policing residential areas or car vaping is also lacking clarity. 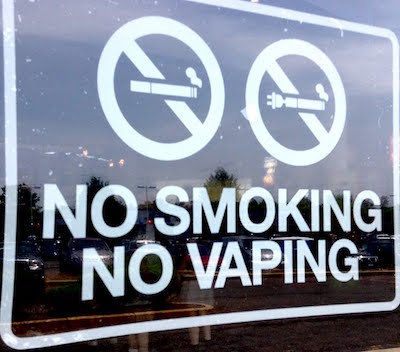 Non-smoker Andrea Miles welcomed the news but wondered why it was not possible just to set up a smoking/vaping section outside: “because it's fun for smokers to be able to smoke outside,” she said.

Many business owners were left feeling aggrieved. The owner of Ziggy’s Bar told CBC News: “We were sort of caught off guard because we haven't gotten anything – we got no letters or anything. So I don't even know exactly what it entails. Do I throw the customers out when they smoke? They passed the law without even thinking about it. It’s Grand Prix in two weeks, what rocket scientist decided to do it this week, and couldn't wait 2 weeks till after Grand Prix when we get all the Europeans coming into town and all of them are smokers?”

The action raises the stakes across the border in Ontario where vapers were hoping the politicians would see sense and drop their measures. A vaper protest caused officials to delay implementing their legislation but Liberals have rebuffed an opposition motion allowing vaping to take place in vape shops and the ban is once again on the cards. The move also targets where medical marijuana can be smoked or vaped.