Social media greeted the news that Lord Callanan was withdrawing his debate with a mixture of anger and frustration. The Labour and Lib-Dem parties set themselves up in support of the government leaving hopes of a joint opposition to the government’s plans in tatters. 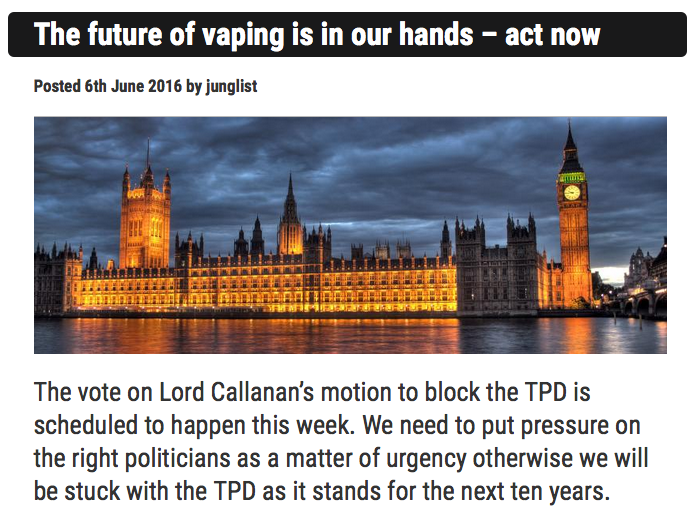 The call to support a petition and write to politicians met with the most positive response of any campaign to date. Over FIFTY-TWO THOUSAND people signed the petition, record numbers of vapers have been sharing emails they’ve received from politicians online, and yet it now counts for nothing.

The #LordsVapeVote hashtag exploded with anger and vitriol at the news that Labour’s Shadow Health secretary, Heidi Alexander, had succumbed to lobbying on behalf of ASH UK. Comments on the Twitter microblogging ranged from questions demanding answers to outright abuse of @heidi_mp.

Vape Emporium wrote: “No politician has done more for vaping than the incredibly courageous Martin Callanan. As an MEP and now in the House of Lords he has fought like a tiger for vaping.

However in the UK Parliament, he has not been able to block the pro EU Commission instincts of Labour’s Shadow Health Secretary, Heidi Alexander. Despite Labour’s leader Jeremy Corbyn having described the TPD as “perverse” and “contradictory”, Labour has announced that it will vote against Lord Callanan’s fatal motion against the TPD. Sadly there is simply now no chance of the Lords vote being won.” 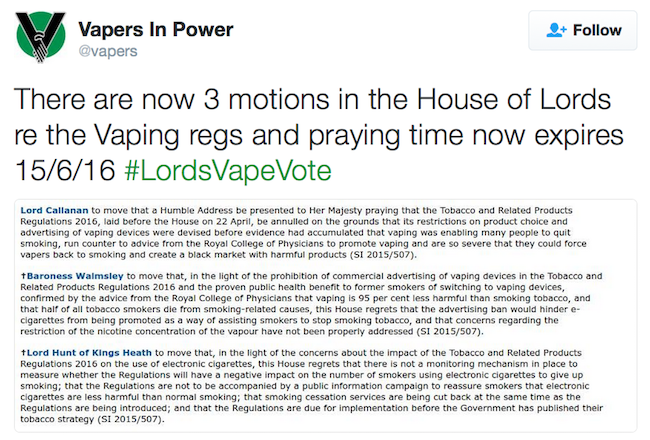 John Summers detailed his exchange with Heidi Alexander and it makes for depressing reading, not least because she used the same template response to everybody regardless of the points they raised. It lent heavily on the corrupted position now being taken by ASH UK regarding nicotine strength and made a number of logical errors.

“It would appear clear that ASH England and Deborah Arnott have whispered in your ear,” John replied, “as the dismissal of people using over 20mg liquids is one of their fallacious lines. More than 9% of existing vapers use eliquid over 20mg strength. Initial switchers use 24-36mg generally, so this wiĺl impact them heavily. The "quality" of eliquid is of no relevance to the 10ml bottle limit. Similarly the device limit is also not related to quality.”

“Despite the valiant efforts of many in the vaping community, there was no chance of Labour and/or the Lib Dems supporting my motion,” wrote Lord Callanan. “I therefore consulted some of my parliamentary backers and they all agreed that there was no point in pursuing the debate next week when we were certain to lose, probably overwhelmingly.”

It is hard to see this as anything other than the end of a painful process that has culminated in the failure of politicians to do the logical thing. Some are calling for vapers to continue trying to convey the positive vaping story to their MPs. Do you think you will continue fighting for your right to vape as you do currently or are you calling it a day? 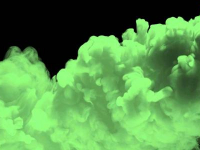 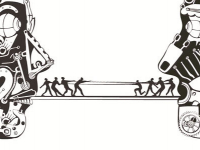