The Scottish government have released a report that details electronic cigarette use for the first time. Given the meteoric rise in vaping it was a surprising omission in 2014. With the information at their disposal, Scotland can now base future actions on sound data instead of anecdote.

The report released last year is notable for the lack of any mention of electronic cigarettes; this is something that has been addressed with this year’s work. The headline figure is that 15% of Scots have tried an electronic cigarette with 5% (or 1 in 20) using one on a regular basis.

"These findings confirm that e-cigarettes are being used by a small, but not insignificant proportion of people in Scotland with one in every 20 saying that they currently use electric cigarettes,” said , research director Diarmid Campbell-Jack. “It’s important that the role of e-cigarettes isn’t over estimated, particularly until more is known about their long term consequences, however the more that we see a decline in usage of tobacco cigarettes the better for the future of health in Scotland." 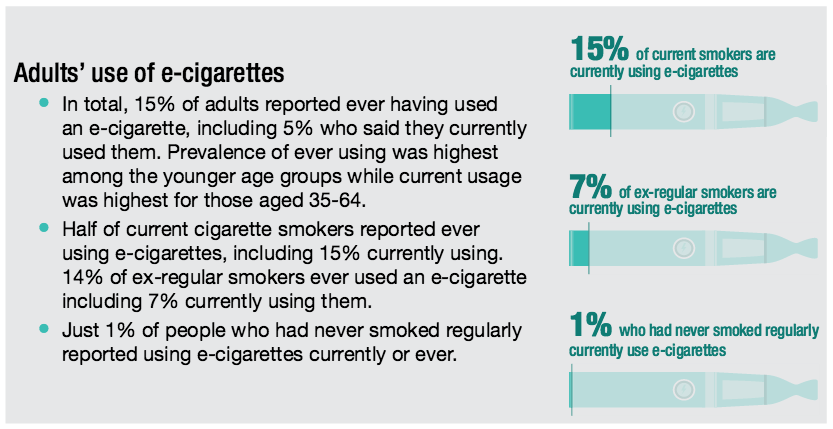 Half of all smokers have tried an ecig and regular vapers tend to be between 35-64 years old. The report highlights that the two most popular methods used for smoking quit attempts were patches (36%) and vaping devices (32%) but it does not link the success rates to either option. Other studies have shown NRT products to have less than a 2% success rate, very poor when compared with vaping.

"Further research on the health impacts of e-cigarettes on both users and bystanders is needed, and we will continue to monitor evidence,” said the minister for public health, Maureen Watt. "However, current evidence suggests e-cigarettes are far less harmful than tobacco and if using them helps smokers quit entirely then that is to be welcomed."