Here’s a round up of recent vape-related events unable to be squeezed into other features. For tales of theft, argument, obscure tech, stupidity and yet more stupidity...read on McDuff.

Ecigwizard franchisee Niall McGuckin faces an uncertain future after thieves broke into his Hemsworth store, near Pontefract. Niall invested in running his own business instead of going to University but is left hoping that his insurance company will foot the bill for the losses and damage. After breaking through window cages the robbers took all the stock, including the shop till, prior to trashing what was left leaving the sad owner feeling “gutted”. POTV’s thoughts are with you, Niall. 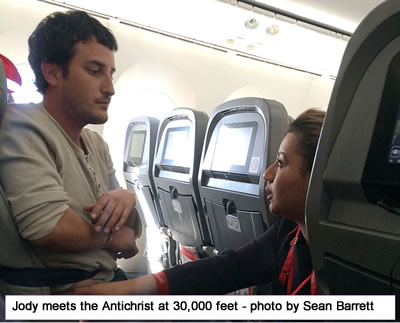 Medpage are currently running an opportunity for vapers to add to their comments sections by featuring three additions to the vaping debate. In one corner, the ‘No’ to ecigs position is put as meekly as possible – stating against all the evidence that vaping does not help people quit. The outstanding Holly R. Middlekauff MD retorts, with a resounding ‘Yes’ to ecigs. Giving an overview, Robert Jasmer MD labels those in favour of vaping as a method of harm reduction “realists” while damning those against as “idealists”. There are parts of his San Francisco driven beliefs that will irk some vapers but the three pieces are well worth reading if you have a cup of tea, a sense of inner peace and five minutes spare.

Tech-heads will be interested in the ecig and phone app combo being covered in The Gadgeteer. €79.90 buys you a nicotine-free basic eGo/Evod that can be Bluetooth paired with a phone to give you up to the minute information about how many puffs you’ve had. It provides other information but nothing about how angry you are getting from the poor vape quality or lack of nic. Smokio claim it “is the tailor-made coach you need to get rid of your bad habit.” Fortunately, if you are getting frustrated from withdrawal, you can annoy your friends with frequent Facebook stat updates.

In a ‘what on Earth was he thinking?’ moment, 26yr old Miami bartender Jody Bochner  cost Norwegian Airlines €100,000. The Irish Independent would like you to believe that it was all “sparked by a row over an e-cigarette.”

The St. Thomas Aquinas versus NASA blog would prefer you to think it was due to “the demons of the air together with the Antichrist,” resulting from the plane going over 29,050 feet. 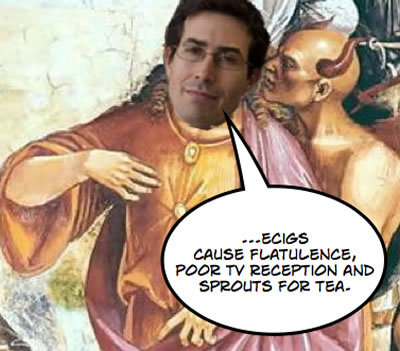 “He then started to hit the chair in front of him screaming ‘I hate you’ but there was nobody in the chair,” said witness Sean Barrett; clearly the fault of the invisible Beelzebub then and nothing to do with a litre of gin or vaping at all.

Finally, Voice of America (speaking for all Americans everywhere) let’s rip with the headline “E-cigarettes Can Cause Permanent Brain Damage for Teens”. Child doc Jonathan Winickoff has divined, through the medium of not consulting any studies, that experimenting with ecigs is akin to “playing Russian roulette with the brain.”

The amusingly named Winickoff lists off all the dangers ecigs pose (that he made up on the way to work that morning): “decreased working memory, tension problems as adults, increased rates of depression, anxiety,” and “sets up the adolescent brain for more durable and stronger addiction pathways for other substances such as cocaine, marijuana and other drugs.”

People may wonder if the Antichrist mistook the rarefied air between Winickoff’s ears for that of the atmosphere at 30K feet and decided to get up to some malarkey. 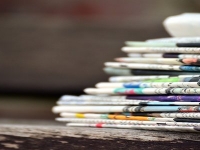