Lord Kennedy had the COVID-19 pandemic on his mind, while Helen Hayes MP was thinking about the children. Sir Desmond Swayne MP tabled a question regarding menthol, Bob Blackman MP focussed on the government’s smoke-free target, and Adam Afriyie MP asked a host of questions. Meanwhile Baroness Northover wanted to see smoking banned from pavements – and who knows what would follow in its footsteps for vaping?

Lord Kennedy of Southwark asked: “What plans [does the government] have to launch a campaign to address nicotine addiction to deliver a better outcome for COVID-19 patients?”

Lord Bethell told him that Public Health England has issued a wealth of advice on quitting smoking during the coronavirus outbreak. Some might wonder why Lord Kennedy was asking a question that a simple thirty second Google would have answered.

Dulwich and West Norwood’s Helen Hayes asked Jo Churchill when the Department of Health and Social Care plans on publishing its response to the potential funding options for programmes to reduce smoking uptake amongst young people.

The government was unable to provide an answer.

Sir Desmond Swayne wants menthol cigarettes to go back on sale after the Brexit negotiations have concluded. Jo Churchill told him: “As the ban is part of United Kingdom legislation, it will remain in place when the UK exits the transition period with the European Union. Removing menthol cigarettes is an important milestone to help people quit smoking and improve their health and support the Government’s drive towards a smoke-free society by 2030.”

Bob Blackman reiterated his call for a charge to be placed on tobacco companies that would fund “evidence-based tobacco control measures”.

Again, Jo Churchill was unable or unwilling to provide a response.

Adam Afriyie asked a host of questions that are waiting on a reply:

POTV doesn’t sponsor a monthly prize for the most outrageous idea, but if it did then Baroness Lindsay Northover would be celebrating by holding the trophy aloft. 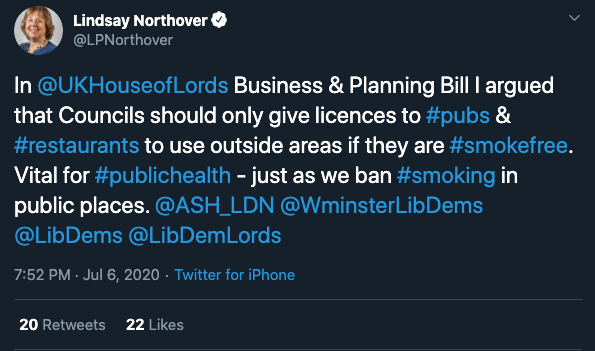 Northover thinks it is a smashing idea to limit any pub or restaurant thinking about using outdoor spaces to ban smoking – and, no doubt, would follow this by demanding vaping goes down the same path.

“The ban on smoking inside public places has displaced smokers from using adjacent outdoor areas, which exposes passers-by and those going in, with staff as always worst affected.

“Pavement licences will exacerbate the problem as they are designed to make it easier for bars, restaurants and pubs to serve food and drink to customers on the pavement immediately outside their premises. While previously those wishing to avoid second-hand smoke could stay inside, remaining indoors is both more restricted and riskier because of the coronavirus.

“Local authorities could, therefore, prohibit smoking on an ad-hoc basis, but so far councils have not taken that up. If smoking is not prohibited, these pavement areas will not be family-friendly spaces. Not only customers and staff but neighbouring premises, particularly in cramped urban areas, will be exposed to second-hand smoke.

“The Government should make smoke-free status a requirement for all pavement licences. It will be easy to do but, if they cannot take such a simple step forward, we will have to doubt their commitment to delivering a smoke-free England by 2030.”