Fears expressed by Chief Medical Officer Sally Davies in our other article today have been dismissed by latest research from Action on Smoking and Health (ASH). In Britain, young people vape just to give it a try, not because they think it’s “cool”. Despite this, the British Medical Association still thinks strict legislation is the way forward.

The new research shows vaping remains uncommon among young people, and young people vape mainly just to give it a try (52%) not because they think it looks cool (1%).

The findings come from an annual YouGov survey, commissioned by ASH, which examines youth use of e-cigarettes in England, Wales and Scotland (Great Britain). 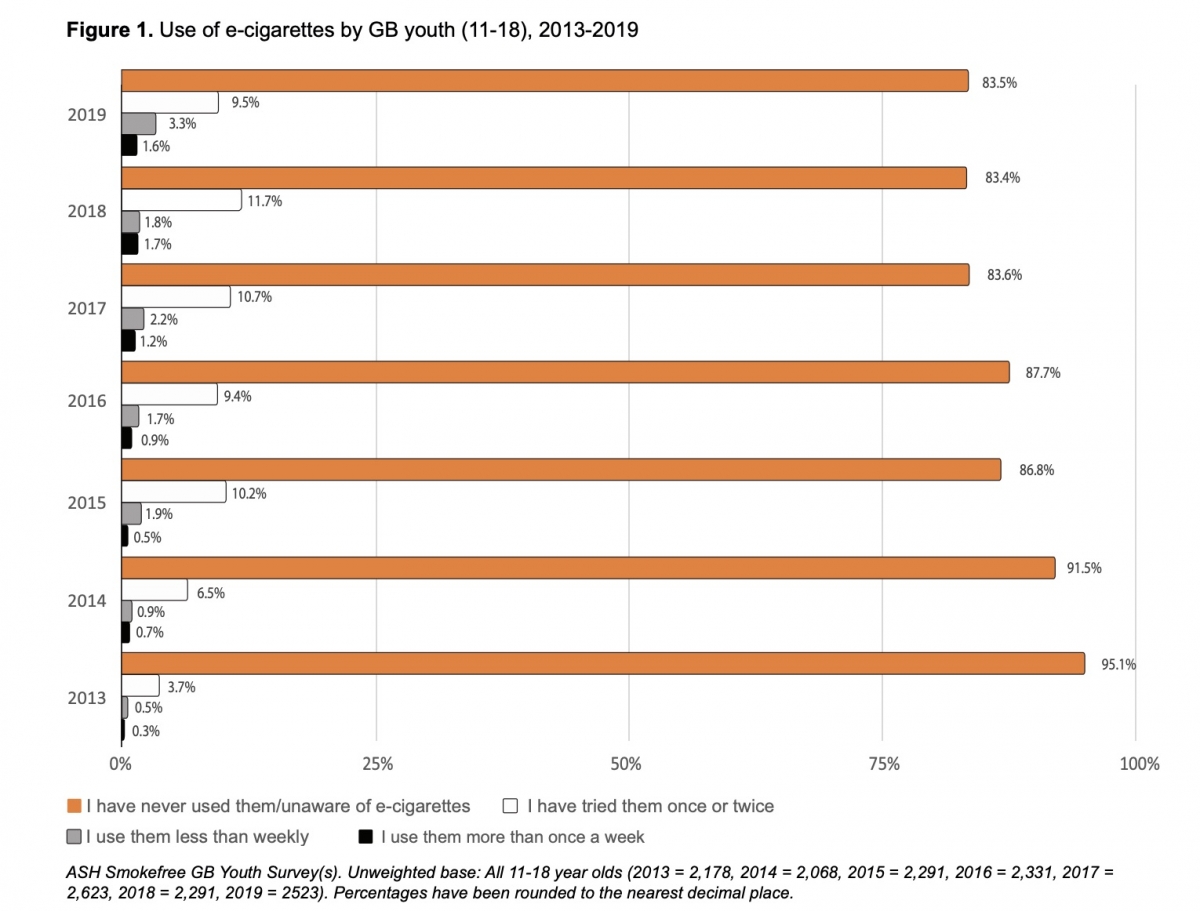 Those that have never smoked but have vaped are more likely than average to say the main reason was just to give it a try (71% compared to 52% on average). 11% of never smokers said the main reason they tried e-cigarettes was because other people used them so they joined in; 10% said they liked the flavours; while under 1% (0.5%) said it was because they thought it looked “cool”. 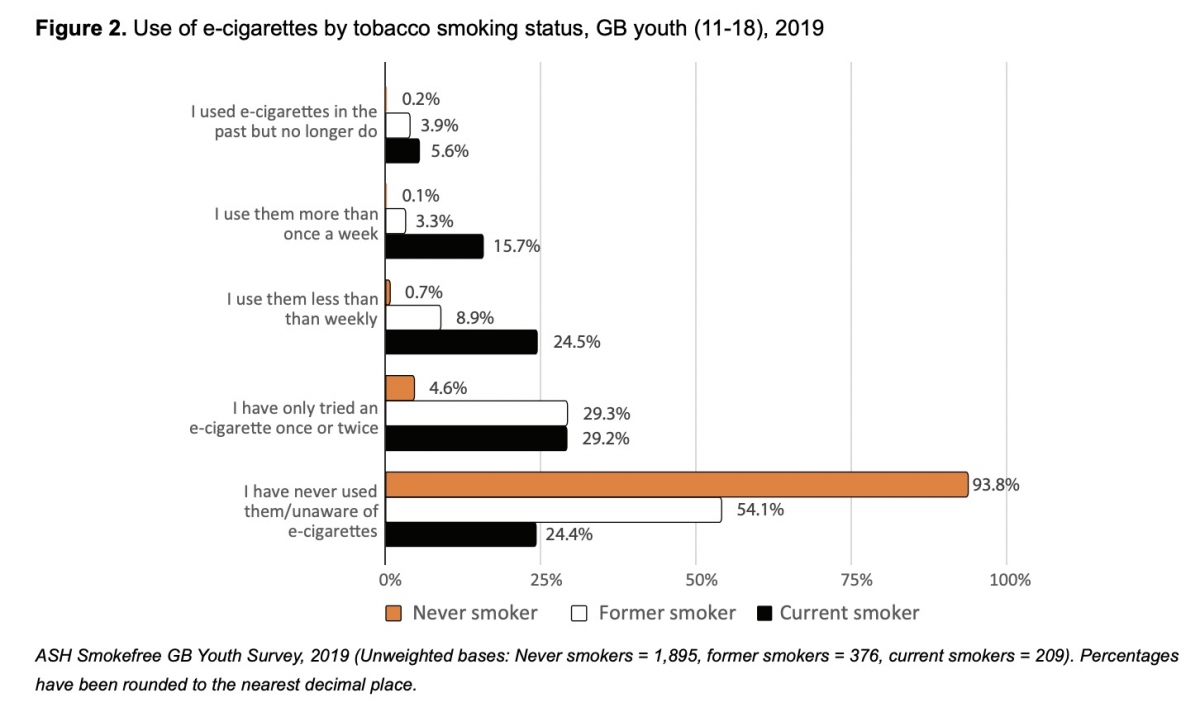 ASH says: “When US e-cigarette brand JUUL entered the UK market in summer 2018, (although with nicotine content capped by EU legislation at much lower levels than in America) US anti-tobacco campaigners called on the British government to take action. They warned that this brand with its ‘super-cool’ image could take off among children in the UK as it is said to have done in the USA. Given these concerns specific questions were asked about brand awareness and use among young people in this year’s ASH Smokefree GB youth survey.”

“When the survey was carried out in March/April 2019 JUUL had the highest brand awareness among 11-18 years olds, but only 7% were able to name it unprompted. When those who had ever tried e-cigarettes were asked which brands they had used in the last 12 months, Smok was the most commonly used at 15%, followed by JUUL (14%), Vype (13%), blu (10%) and Logic (4%). Unsurprisingly given the low levels of regular use, 55% of those who had ever tried e-cigarettes said they didn’t know what brand they used.” 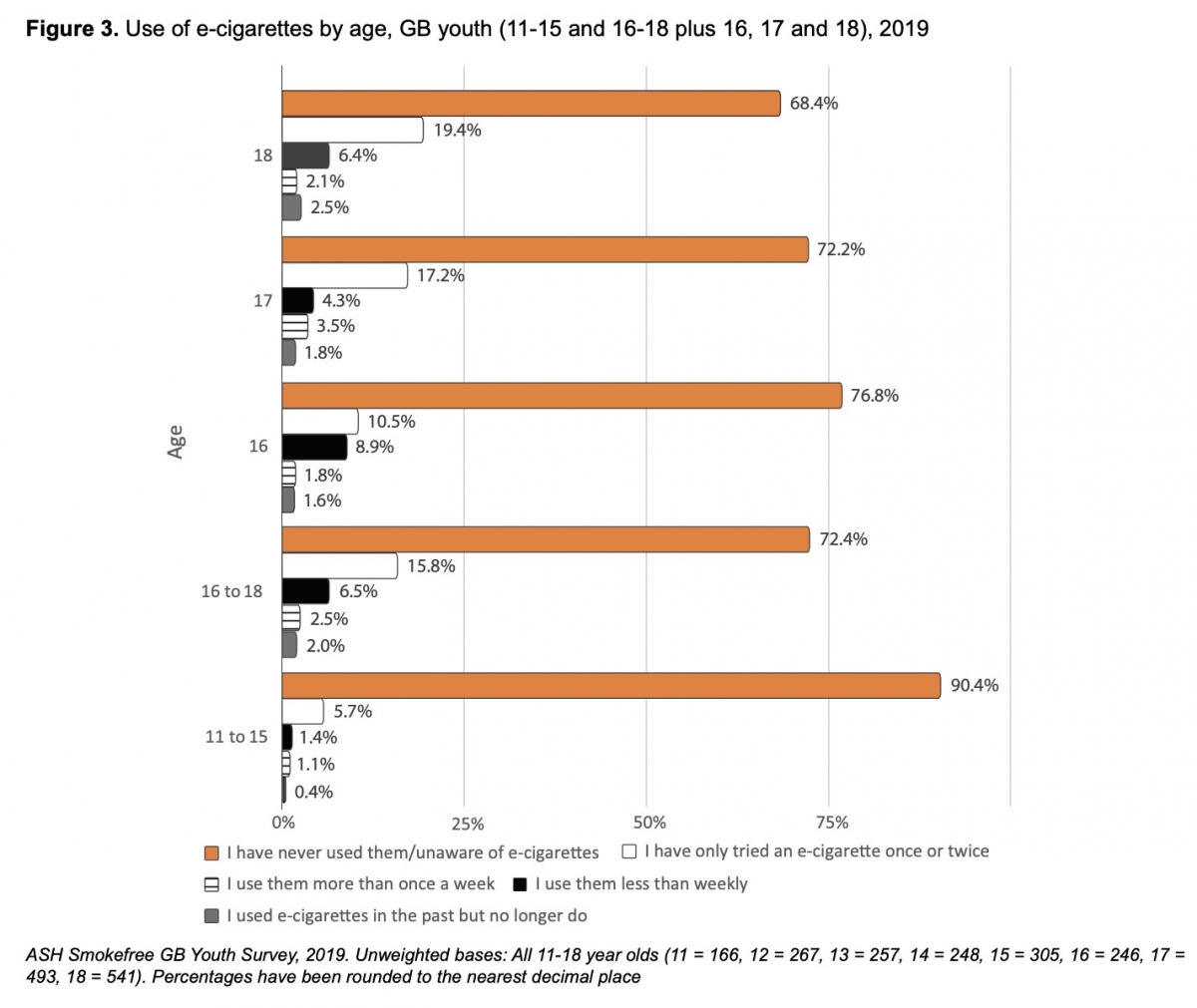 Deborah Arnott, chief executive of ASH, said: “We need to be vigilant and continue to monitor e-cigarette use among young people. However, smoking prevalence among children and young adults in Britain has fallen substantially since 2010, which doesn’t indicate that vaping has been a gateway into smoking. And to date there is little sign that vaping is the ‘super-cool’ phenomenon among young people here that it is said to be in the USA.”

Professor Parveen Kumar, chair of the British Medical Association (BMA) Board of Science said: “While the British Medical Association believes there is a role for e-cigarettes in helping adult smokers quit, it is vitally important that we do all we can to protect children and young people from taking up vaping. That is why the BMA supported the introduction of substantial restrictions on advertising, promotion and sale of e-cigarettes in the UK.”

“We are pleased that the Government has committed to review the regulations within five years of their implementation to ensure that they continue to provide adequate protection for children and young people. It’s reassuring however that the ASH survey shows that regular vaping remains rare among British youth, and that young people vape mainly just to give it a try, not because they think it’s cool.”