POTV reported last week that the Journal of the American Heart Association (JAHA) was resolutely refusing to retract a study by Stanton Glantz, where he claimed vaping caused heart attacks in people who had yet to vape. Finally, it has seen sense and withdrawn the exercise in academic malfeasance. Glantz has responded in a particularly salty fashion.

“There is no ambiguity about the problems with the paper and no argument to delay its removal from the published literature. One has to ask the question: if not this, then what would cause JAHA to retract a paper that was so obviously unreliable?”

Yesterday, spokesperson for the American Heart Association Michelle Kirkwood wrote: “The Bhatta and Glantz manuscript has been thoroughly reviewed in the past 7 months and the process is now complete. As of 2/18/20, JAHA has retracted the document.”

JAHA posted a commentary on its site: “After becoming aware that the study in the above‐referenced article did not fully account for certain information in the Population Assessment of Tobacco and Health [PATH] Wave 1 survey, the editors of Journal of the American Heart Association reviewed the peer review process.”

“During peer review, the reviewers identified the important question of whether the myocardial infarctions occurred before or after the respondents initiated e‐cigarette use, and requested that the authors use additional data in the PATH codebook (age of first MI and age of first e‐cigarettes use) to address this concern. While the authors did provide some additional analysis, the reviewers and editors did not confirm that the authors had both understood and complied with the request prior to acceptance of the article for publication.”

“Post publication, the editors requested Dr. Bhatta et al conduct the analysis based on when specific respondents started using e‐cigarettes, which required ongoing access to the restricted use dataset from the PATH Wave 1 survey.1 The authors agreed to comply with the editors’ request. The deadline set by the editors for completion of the revised analysis was not met because the authors are currently unable to access the PATH database. Given these issues, the editors are concerned that the study conclusion is unreliable.”

“The editors hereby retract the article from publication in Journal of the American Heart Association.” 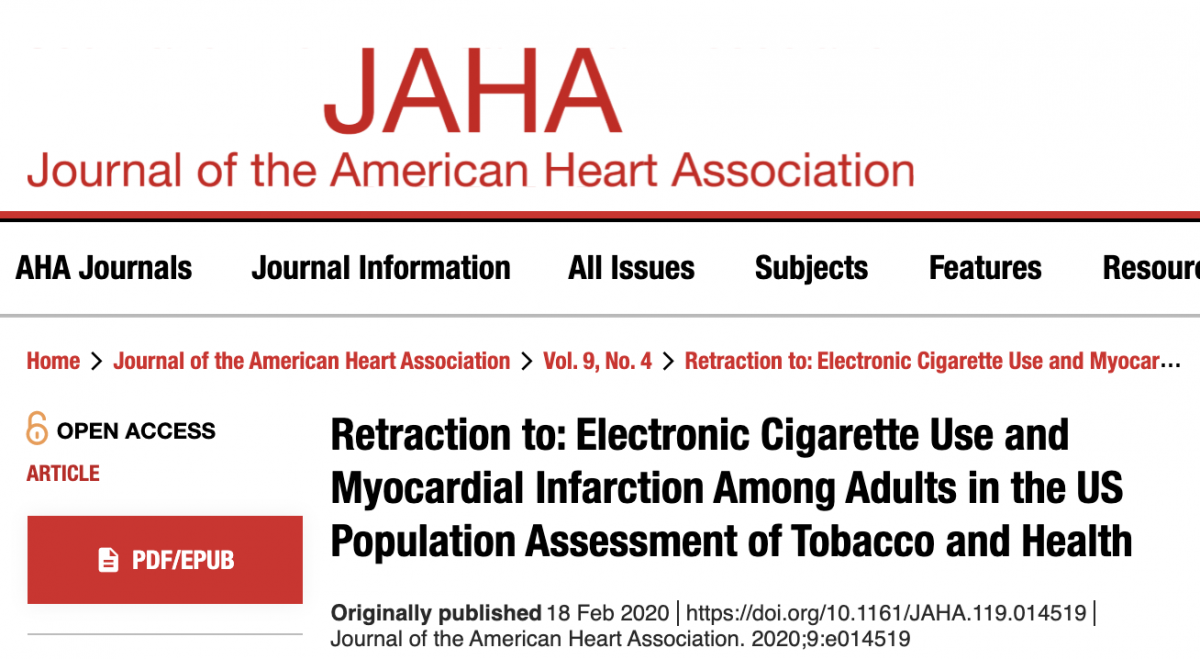 Stanton Glantz demonstrated what a man of integrity and honour he is by not accepting the decision. Instead, Glantz says the journal has caved in to “e-cig interests”.

Doubling down on stupid, he wrote: “We found an association between e-cigarette use and having had a myocardial infarction that was independent of the effect of any current or former cigarette smoking by respondents.”

Moreover, Glantz is now attempting to claim that the situation could be worse than he claimed in the paper due to the fact that people having heart attacks before vaping was “invented” softened his findings.

Then he spits the dummy and starts flinging mud at Brad Rodu, the academic who highlighted the serial flaws in the work. He thinks Rodu didn’t follow protocol by writing a letter to the journal and allowing him the right to respond, he believes this is motivated by Rodu’s objection to his gateway paper, and he repeats slurs about Rodu’s “links to the tobacco industry”.

The journal had called on the authors to do additional work, but they didn’t do it. “Dr. Bhatta and I have no issue with doing such additional analysis,” Glantz continues. But, “during the process of revising the paper in response to the reviewers, we reported some sample size numbers without securing advance approval from the University of Michigan, who curates the PATH restricted use dataset. This was a blunder on our part.  As a result, the University of Michigan has terminated access to the PATH restricted use dataset, not only for Dr. Bhatta and me, but for everyone at UCSF.”

Glantz is correct in his definition of retraction, but fails to accept that he committed wrongdoing: “Scientific misconduct in research and non-research publications includes but is not necessarily limited to data fabrication; data falsification including deceptive manipulation of images; purposeful failure to disclose relationships and activities; and plagiarism.” [link]

There has never been a clearer example of “scientific misconduct”, and it was correct for the paper to be retracted. Maybe journals will think twice before publishing further pieces of work by Stanton Glantz – although now he is banned from using the PATH data, there won’t be many in the foreseeable future.