Posted 2nd September 2014 by Toby Kilroy
From basic information to advanced usage, it's always a good idea to know what you're putting in your shiny new mod.

What is a battery?

First things first, we must define what we are talking about when we refer to a "Battery". batteries come in many shapes, sizes, types, and chemistries. But all have on thing in common - technically a single unit is known as a cell and multiple units together are known as "Batteries" Thus the "Battery" in a laptop computer may consist of 6 or more 18650 size "Cells" fitted together in a single package and referred to as a "Battery". It is however, common practice to refer to single cells used to power a device as batteries, and for the sake of simplicity in this document we will refer to single cells as "Batteries" and groups of cells as "Battery packs" as these are terms readily understandable by both the Layperson and the more technically minded.

How do Batteries work?

Early batteries were created in glass jars, but mass production changed the packaging to the easily manufactured cylindrical design. In 1896 the large F cell was pioneered for lanterns; the D cell followed in 1898, the C cell in 1900, and the popular AA was introduced in 1907. Modern Design criteria and cost considerations have often required new battery formats that offer distinct commercial or ergonomic advantages over the standard cylindrical design.

The cylindrical cell continues to be one of the most widely used packaging styles for primary and secondary batteries. The advantages are ease of manufacture and good mechanical stability. The tubular cylinder has the ability to withstand internal pressures without deforming. Figure 1 shows a cross section of a cell. 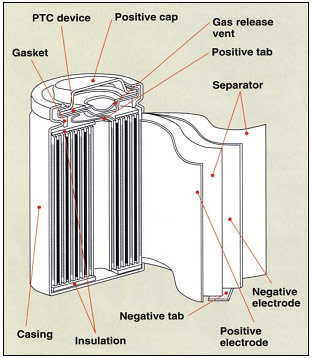 The cylindrical cell design has good cycling ability, offers a long calendar life, is economical but is heavy and has low packaging density due to space cavities.

Typical applications for the cylindrical cell are power tools, medical instruments and laptops. Nickel-cadmium offers the largest variety of cell choices, and some popular formats have spilled over to nickel-metal-hydride. To allow variations within a given size, manufacturers use fractional cell lengths, such as half and three-quarter formats. 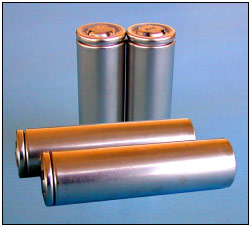 The established standards for nickel-based batteries did not catch on with lithium-ion and the chemistry has established its own formats. One of the most popular cell packages is the 18650, as illustrated in Figure 2. Eighteen denotes the diameter and 65 is the length of the cell in millimetres the terminal zero indicates a cylindrical cell. The Li-manganese version 18650 has a capacity of 1,200–1,500mAh; the Li-cobalt version is 2,400–3,000mAh. The larger 26650 cells have a diameter of 26mm with a length of 65mm and deliver about 3,200mAh in the manganese version. This cell format is frequently used in power tools and some hybrid vehicles.

The metallic cylinder measure 18mm in diameter and 65mm the length. The larger 26650 cell measures 26mm in diameter.

Introduced in the early 1990s, the prismatic cell satisfies the demand for thinner sizes and lower manufacturing costs. Wrapped in small neat packages resembling a box of chewing gum, prismatic cells make optimal use of space by using a layer approach. These cells are predominantly found in mobile phones with lithium-ion. No universal format exists and each manufacturer designs its own. If the housing design allows a few millimetres extra in a cell phone or laptop, the manufacturer designs a new pack for the sake of higher capacity. The expense of designing a new battery for each product is justified by the very high unit volumes.

Prismatic cells are also making critical inroads into the larger formats. Packaged into welded aluminium housings, the cells deliver capacities of 20 to 30Ah and are primarily used for electric power trains in hybrid and electric vehicles. Figure 4 shows the prismatic cells construction. 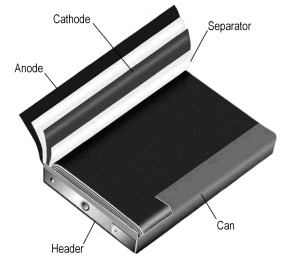 The prismatic cell improves space utilization and allows flexible design but it can be more expensive to manufacture, less efficient in thermal management and have a shorter cycle life than the cylindrical design.

In 1995, the pouch cell surprised the battery world with a radical new design. Rather than using a metallic cylinder and glass-to-metal electrical feed-through for insulation, conductive foil tabs welded to the electrode and sealed to the pouch carry the positive and negative terminals to the outside. Figure 5 illustrates such a pouch cell. 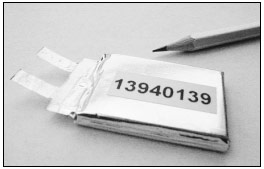 These are the three main types of battery one is likely to encounter in the use of Personal Vaporisers. With the main type being the cylindrical cell in the most common sizes of 18650, 18500, 18350, and 14500, the 26650 size is now becoming popular with a trend for both Mechanical and Regulated devices of larger sizes.

Prismatic and pouch cells are only likely to be found in mass market Box type mods as they are often fixed into place and charged via a charging circuit built into the device.

All current Lithium based batteries are manufactured in the same basic way using an Anode, Cathode and a separator. The layers are then tightly wound into a spiral and fitted into the batteries outer container as shown in Figure 6 & 7 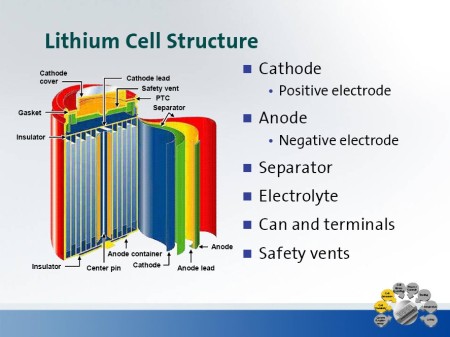 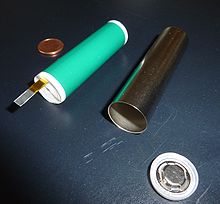 Lithium is the lightest of all metals, has the greatest electrochemical potential and provides the largest specific energy per weight. Rechargeable batteries with lithium metal on the anode (negative electrodes) could provide extraordinarily high energy densities; however, it was discovered in the mid 1980s that cycling produced unwanted dendrites on the anode. These growth particles penetrate the separator and cause an electrical short. When this occurs, the cell temperature rises quickly and approaches the melting point of lithium, causing thermal runaway, also known as “venting with flame.” A large number of rechargeable metallic lithium batteries sent to Japan were recalled in 1991 after a battery in a mobile phone released flaming gases and inflicted burns to a man’s face.

The specific energy of Li‑ion is twice that of NiCd, and the high nominal cell voltage of 3.60V as compared to 1.20V for nickel systems contributes to this gain. Improvements in the active materials of the electrode have the potential of further increases in energy density. The load characteristics are good, and the flat discharge curve offers effective use of the stored energy in a desirable voltage spectrum of 3.70 to 2.80V/cell. Nickel-based batteries also have a flat discharge curve that ranges from 1.25 to 1.0V/cell. 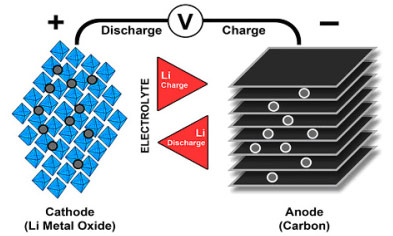 Similar to lead and nickel-based cells, lithium-ion uses a cathode (positive electrode), an anode (negative electrode) and electrolyte as conductor. The cathode is a metal oxide and the anode consists of porous carbon. During discharge, the ions flow from the anode to the cathode through the electrolyte and separator; charge reverses the direction and the ions flow from the cathode to the anode. Figure 8 illustrates the process.

Figure 8: Ion flow
in lithium-ion battery.
When the cell charges and discharges, ions shuttle between cathode (positive electrode) and anode (negative electrode). On discharge, the anode undergoes oxidation, or loss of electrons, and the cathode sees a reduction, or a gain of electrons. Charging reverses the movement.

Common cathode materials are Lithium Cobalt Oxide (or Lithium Cobaltate), Lithium Manganese Oxide (also known as spinel or Lithium Manganate), Lithium Iron Phosphate, as well as Lithium Nickel Manganese Cobalt (or NMC) and Lithium Nickel Cobalt Aluminium Oxide (or NCA). All these materials possess a theoretical specific energy with given limits. (Lithium-ion has a theoretically capacity of about 2,000kWh. This is more than 10 times the specific energy of a commercial Li-ion battery.) Developments also occur on the anode and several additives are being tried, including silicon-based alloys. Silicon achieves a 20 to 30 percent increase in specific energy at the cost of lower load currents and reduced cycle life. Nano-structured lithium-titanate as an anode additive shows promising cycle life, good load capabilities, excellent low-temperature performance and superior safety, but the specific energy is low.

Table 1, summarizes the characteristics of Li-ion with different cathode material. The table limits the chemistries to the four most commonly used lithium-ion systems and applies the short form to describe them. The batteries are Li-cobalt, Li-manganese, Li-phosphate and NMC. NMC stands for nickel-manganese-cobalt, a chemistry that is relatively new and can be tailored for applications needing either high capacity or high loading capabilities. Lithium-ion-polymer is not mentioned as this is not a unique chemistry and only differs in construction. Li-polymer can be made in various chemistries and the most widely used format is Li-cobalt.

As part of ongoing research to examine performance degradation caused by cycling, Cadex tested a large volume of portable batteries for wireless communication devices. The population consists of nickel-cadmium, nickel-metal-hydride and lithium‑ion. The batteries were prepared by applying an initial charge, followed by a regime of full discharge/charge cycles. The internal resistance was measured with OhmTest™ and the self-discharge was obtained from time to time by reading the capacity loss incurred during a 48-hour rest period. The tests were carried out on the Cadex 7000 Series battery analyzers.

Figure 10 examines the capacity and internal resistance of lithium-ion. We can observe a gentle and predictable capacity drop over 1,000 cycles while the internal resistance increases only slightly. Because of low readings,  self-discharge readings were omitted. Batteries tested in a laboratory environment tend to give better results than when used in the field as everyday use does not transfer well into the laboratory. Aging plays a minimal role in the lab because the batteries are cycled over short period of a few months rather than the expected service life of a few years, correct charging regimes are always used and there are minimal environmental changes. However these test do give a true picture of how a healthy battery will age. 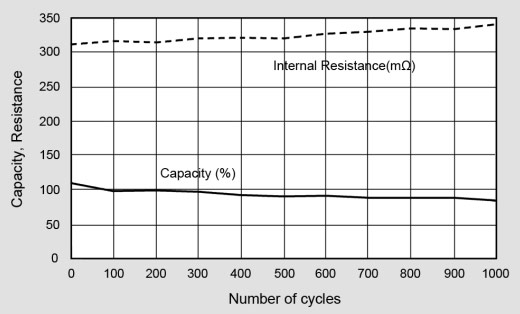 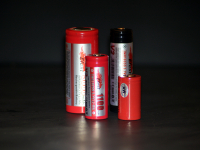